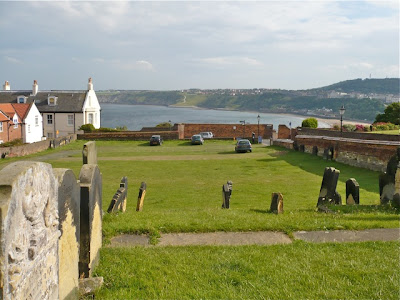 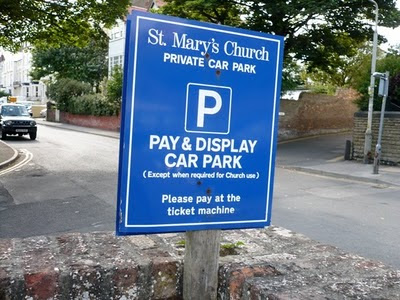 IMS writes:
Having made my pilgrimage to Anne Brontë’s grave last weekend, I was very interested to read the article on the Brontë Parsonage Blog. The subject of the grave can be guaranteed to be touched upon at the Brontë Society’s annual general meeting next June - and of course Haworth itself is no stranger to controversy regarding car parking.

If the mortal remains of Anne Brontë could not be deposited in Haworth I always think that the spot Charlotte chose is idyllic- just below the dramatic ruins of the castle and overlooking the bay Anne had come to love. Much has been debated through the years about the state of the headstone and surrounding ground but last week it was my opinion that the grave has never looked better.
Of course the stone itself has suffered some understandable damage through the years and this last severe winter has taken its toll on one or two letters of the inscription but compared to other stones in the surrounding area it has stood the test of time surprisingly well. The area in front of the headstone is now grassed over and level -  which will make,  I guess, tidying and mowing much easier. A very tasteful arrangement of flowers had been left in tribute to the youngest member of that remarkable family.
The area where cars are now allowed to park is visible, yet quite some distance, from the grave - being separated by a steep incline.  Car parking in church grounds and on reclaimed churchyards will always be controversial, and I would not wish to comment on the rights and wrongs of the church allowing their land to be used in this way, but would certainly respect that personal opinions will be varied.
However to show, perhaps, another perspective on the subject, as I was sitting near the grave,  admiring the view and savouring the peace and quiet,  an elderly man and woman came to sit on the same seat. We got chatting and they told me that when they visited Scarborough they always liked to spend a little while at the grave side and they were so pleased that they were able, now, to park on the grass on the church land.
Parking in the vicinity is allowed only by permit or disc, there were never any spaces and the climb up from the sea front or the town was impossible for them now.
I am sure that you will be receiving more correspondence on this issue regarding the latest use of the land - once an Iron Age settlement - which has survived siege and attack over many centuries.

Richard Wilcocks adds:
Please let us have your views. Send them to heveliusx1@yahoo.co.uk, or click on 'post a comment' below.
Posted by Richard Wilcocks at 4:57 pm
Email ThisBlogThis!Share to TwitterShare to FacebookShare to Pinterest

Thank you Richard for showing the other side of the argument when the Car Park is very quiet.
However, I would question the time that picture was taken, as it appears to be late Afternoon once a lot of the tourists had left for the day. An article was published in The Daily Telegraph which has added a lot of support to the campaign. The link is:
http://www.telegraph.co.uk/culture/culturenews/7888608/Anne-Bronte-grave-site-turned-into-pay-and-display-car-park.html