Christa Ackroyd, Brontë Society member and presenter on BBC TV Look North, is to give a talk about the Brontës at Hartshead Church on Saturday 31 March starting at 7.30pm. For tickets  £7.50 with refreshments contact John Ferret  - Ecrb@Live.co.uk   & 01924 403602. This is raise  funds for the church. (from Imelda Marsden)

(Patrick Brontë was parson at St Peter's, Hartshead (near Cleckheaton, now part of Kirklees) between 1811 and 1815. He met his future wife Maria Branwell in Rawdon, now part of Leeds, about twelve miles from Hartshead, in 1811. They married in Guiseley, also now in Leeds.)
Posted by Richard Wilcocks at 12:12 pm 0 comments
Email ThisBlogThis!Share to TwitterShare to FacebookShare to Pinterest

A Horror of Great Darkness: Gothic from the Brontës to Twilight was the main title for yesterday's one day conference for AS and A2 students*, exploring the relationship between the Brontës and Gothic, and how the genre continues to influence contemporary culture. It was particularly relevant to the AQA Literature B syllabus, but was also invaluable to all students wishing to gain a broader critical perspective on both nineteenth century literature, and the understanding of genre. 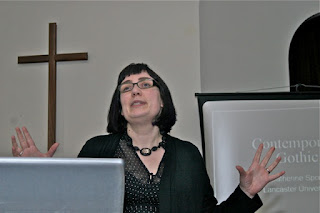 Dr Spooner, dressed appropriately in black, was very much on the same wavelength as her appreciative, overwhelmingly female audience, some of whom (from Altrincham in Cheshire) have promised to send their comments to this blog. Let's hope they do. With the help of a Powerpoint and references to a variety of novels and collections of the past few years (Angela Carter's name cropping up frequently), her main point was that the gothic in all its manifestations has always had a connection with adolescence, with the crossover towards adulthood. 'Threatened virginity'  was a key phrase.

Films on her list included The Woman in Black and Let The Right One In, both of which I would class as significantly disturbing, with a strong 'lingering' quality, especially the second one, in which young Oscar's virginity is threatened by the athletic Eli, who lost hers to the original Transylvanian vampires centuries ago. "Gothic is rampant throughout the contemporary music scene," said Dr Spooner, talking about the persona constructed by 'Mama Monster' Lady Gaga, whose actual music is pretty mainstream pop, and bringing up publicity photos of Marilyn Manson.  "And it's a golden age for gothic television too, there is so much. Think of Vampire Diaries and all the Buffy episodes for a start." 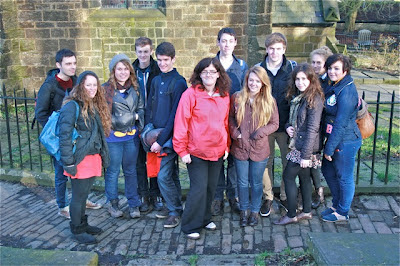 Twilight books are mentioned constantly by her students. She must get tired of her subject sometimes, but is full of professional patience. ( "Perceptions of the gothic are constantly changing... You can't expect the gothic of the nineteenth century to stay as the norm... Today's vampires are different... It depends on how old you are.. It doesn't matter all that much how incredible the situations are or how awful the plotting is...") The Hartley Collins designers were quick to appreciate changing perceptions when they created covers for Wuthering Heights ('Love never dies') and  Jane Eyre ('You can't choose who you fall in love with') which might lure new young readers towards the originals.


*For the benefit of readers outside England and Wales, this means that they are aged between sixteen and eighteen. In the US, they would be studying for APs or SAT II exams.


Pictured - Dr Spooner, and a group of students from Adams' Grammar School in Newport, Shropshire, with Catherine Prince (in red), who showed them round the graveyard.


Posted by Richard Wilcocks at 2:57 pm 3 comments
Email ThisBlogThis!Share to TwitterShare to FacebookShare to Pinterest 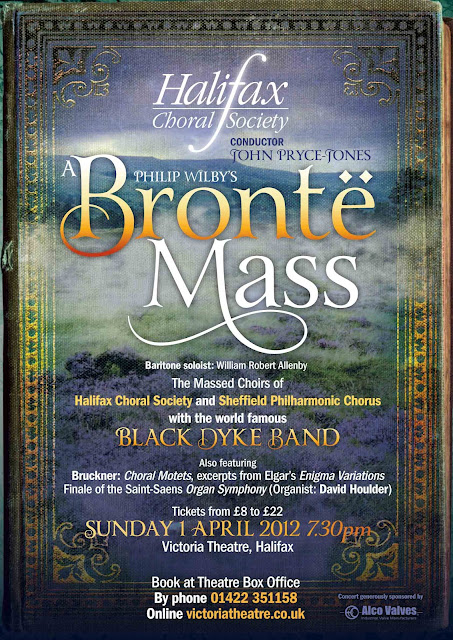 Posted by Richard Wilcocks at 1:46 pm 0 comments
Email ThisBlogThis!Share to TwitterShare to FacebookShare to Pinterest

Richard Wilcocks writes:
Good news! At the cabinet meeting at Huddersfield Town Hall yesterday afternoon it was recommended that the Red House Museum should not close. All the friends and campaigners who have been so wonderfully active in the past couple of weeks can now breathe more easily for a while, hoping that Kirklees Council as a whole will do the right thing when it meets on 22 February. Thanks to everybody who has been in touch, especially to you, Gordon North - your local knowledge is impressively wide-ranging and your alacrity is admirable.


The cabinet made it clear that there should be a new business plan for all the museums in the authority which would include ways of making museums pay their way. This means admission charges, increasing visitor numbers and allowing weddings to take place. All of which is much better than a crassly simple closure plan.


English Heritage has been approached to get the ball rolling to make Red House into a Grade One listed building. It is a Grade Two at the moment. Grade One status could be awarded not because of the architecture but because of the history. Let us hope for this, because it means that new grants would be available.


Kirklees press release.
Posted by Richard Wilcocks at 11:35 am 1 comments
Email ThisBlogThis!Share to TwitterShare to FacebookShare to Pinterest

The Brontë Parsonage re-opens today following a hectic month of activity including maintenance work, cleaning, conservation and development of new displays. The new displays feature several early Bronte manuscripts, including one of the four, tiny editions of the second series of Charlotte Brontë’s Young Men’s magazine,written when she was 13 years old. A fifth edition was sold at Sotheby’s last December for nearly £700,000, with the museum narrowly losing out to the Musée des Lettres et Manuscrits, Paris.

Following a surge of renewed interest in the Brontës, with the high profile manuscript sale and two new Brontë movie adaptations in the second half of 2011, the museum is gearing up for another busy year.

We were delighted to see our visitor numbers rise last year by over 8% and with over 250 bookings for 2012 already, it’s clear that visitors will be coming to Haworth in significant numbers, from within the UK but also from overseas. We have some wonderful exhibitions and events planned that will make their visit here very special.

The next few weeks offers a final chance to see an exhibition dedicated to the Brontës’ remarkable father, Patrick, which will be followed by a new exhibition looking at the fascinating history of the museum’s collection. There will also be an exhibition of costumes from last year’s film adaptation of Jane Eyre, and exhibitions of work by artists Rebecca Chesney and Simon Warner.

These will focus on ‘weather’ and its historic and contemporary associations with the Brontës, and the moorland Brontë location, Top Withens. The Top Withens exhibition will include a survey of photographic images of this iconic site, as well as a sketch of Top Withens by the celebrated poet Sylvia Plath. There is also a packed programme of events with visiting authors.
Posted by Richard Wilcocks at 2:54 pm 0 comments
Email ThisBlogThis!Share to TwitterShare to FacebookShare to Pinterest

Richard Wilcocks writes:
The Area Committee met yesterday evening in Cleckheaton Town Hall, and received a deputation of people who were deeply concerned about the threat to the existence of the Red House Museum. The public was very well represented - in fact the room was packed, every seat taken. Eight of the nine Spen Valley councillors sat in the front row, listening with what I took, fondly perhaps, to be approval. One of them sent apologies for being unavoidably absent. We must remember that the full Council consists of sixty-nine members.


Find out exactly who they are, here.


All of the deputation speakers were asked not to take up too much time and to avoid repeating points. On behalf of the Brontë Society, I gave brief details of the friendship between Charlotte Brontë and Mary Taylor, read descriptions of Briarmains taken from Shirley and generally repeated points made previously on this blog, adding that we were "horrified" by this proposal which had been "sprung upon us at short notice". Peter Jackson, on behalf of the Little Gomersal Community Association, using a set of well-prepared notes, made it quite clear that the proposal to close Red House was very unwelcome in the area, short-sighted and badly thought-out. Local historian Gordon North spoke about the radically-minded Taylors and the impact they made in the eighteenth and the nineteenth centuries, and in particular about Mary Taylor, a brave and strong-willed woman who had sailed to New Zealand in 1845 and who was treated with great respect in that country. Red House is often visited by New Zealanders. He also spoke about the excellent and imaginative educational resources on the site. Member of the Brontë Society Imelda Marsden added her voice, urging all councillors present to take heed of a swelling tide of indignation. The local press made copious notes.


All of the speakers were complimented by the chair of the area committee for sticking to the rules - and all of them were applauded enthusiastically. We were then told that the 'cabinet' meeting on 7 February to look at the proposal would be held in Huddersfield, and that it would be open to the public. More about this later.


According to reports, letters and emails have been arriving from abroad - including from Australia. I have emailed friends in New Zealand to add their voices. Joan Bellamy was on Radio Leeds's Breakfast Show yesterday morning, BBC Look North took viewers on a tour of the house and the issue has been featured in a number of newspapers. Various politicians are coming on board, including Michael McGowan, former MEP for Leeds.
Posted by Richard Wilcocks at 1:36 pm 1 comments
Email ThisBlogThis!Share to TwitterShare to FacebookShare to Pinterest
Newer Posts Older Posts Home
Subscribe to: Posts (Atom)