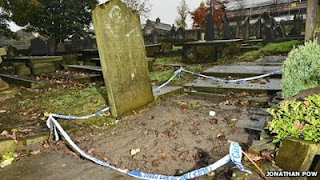 An organised gang of stone thieves is thought to be behind a robbery in Thornton near the historic Bell Chapel, which is connected with Brontë baptisms. About thirty yards  of heavy stone was ripped up - with a total monetary worth of just five hundred pounds. Three gravestones were included in the haul.

The gravestones are six feet by three feet each and six inches thick - which means that it would take four hefty men to lift each one.

“We’re shocked that the church has been desecrated. Some of the graves date back two hundred years. This has upset a lot of local people, it’s just awful,” Old Bell Chapel action group co-ordinator Steve Stanworth said.

Local people have put in twelve years of voluntary labour to restore the Brontë Bell Chapel, and feelings are running high. One stolen gravestone is dated 1790, and another was for John and Mary Pickles and five children, from the early nineteenth century. Another bears the names of Hannah and James Abbott and their 28-year-old daughter Mary. They died in 1828.

The police are appealing for information: the thefts took place between 9pm on Friday 19 October and 8am on Saturday 20 October. Anybody who knows anything about the incident should ring Crimestoppers - 0800 555 111                Click here to email this blog.


Posted by Richard Wilcocks at 7:53 am 3 comments
Email ThisBlogThis!Share to TwitterShare to FacebookShare to Pinterest

In Search of the Brontës in Brussels


Laura Rocklyn writes from New York:
Every time I have read the passage at the beginning of The Professor in which William Crimsworth summons up his memories of Brussels saying, “Belgium!  I repeat the word now as I sit alone near midnight.  It stirs my world of the past like a summons to resurrection,” (Professor 41), I have wanted to visit Belgium and the spots that Charlotte Brontë knew while living there.  This spring I finally realized that dream when I was able to stop in Brussels during a trip around Belgium with my mother.

As I began planning for my day in Brussels, I was astounded by how little information is available about the Brontë sights in modern-day Brussels, but, through the magic of the internet, I found a little book entitled Brussels for Pleasure that details thirteen walks around the city and included one called “Charlotte Brontë and the royal quarter.”  Many of the sights that I had wanted to visit from The Professor, Villette and from the letters Charlotte wrote during her time in Brussels were included in the walk.

Excitement had me up early on my morning in Brussels and ready to set out to find all of the places I was looking for in the city. First on my list was the site of the Pensionnat Heger where Charlotte and Emily both studied, and where Charlotte spent time as a teacher.  I knew that the actual building had been demolished in 1909, but that the statue of General Belliard and the worn flight of steps described in Villette and in The Professor were still there to mark the spot. 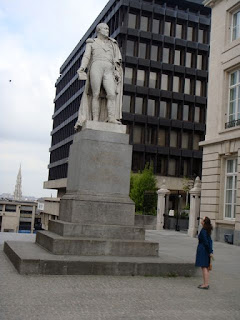 After making good use of my rusty high school French to ask directions, we finally made our way as far as the Place Royale.  I felt an enormous rush of excitement when I saw the beautiful white buildings rising up before me -- “the magnificent street and square, with the grandest houses round” (Villette 55) that Lucy had hurried through in search of the inn that Graham had directed her to upon her arrival in Villette -- and I knew that I was close to the end of my search.  I followed the Rue Royale, with anticipation rising at every step, until the statue of General Belliard appeared on my left just as Graham had said it would in his directions to Lucy.  And there I, like William Crimsworth, “stood awhile to contemplate the statue of General Belliard and then I advanced to the top of the great staircase just beyond” (The Professor 45).  Sadly, the staircase is now covered with graffiti and the view at the bottom is of a disappointingly modern street, but it was still such a splendid feeling to be standing on that spot I had read about so many times!

Next, I crossed the street and went into the Parc de Bruxelles where Lucy ended up at the Assumption Day fete. We found the bandstand where she spotted Graham and Paulina, which Lucy describes as “ a Byzantine building – a sort of kiosk near the park’s center,” (Villette 425).  It was really thrilling for me to find this particular site because it was one of the spots I had been afraid would be too well-hidden for me to find in the somewhat overgrown and labyrinthine park with so little direction from the novel. 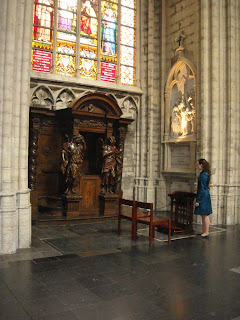 After exploring the park, I walked down the hill to the Cathedral of Saint Gudule where both Lucy in Villette and Charlotte in real life were moved to make confession.  I could not imagine the feelings of someone who was brought up in Haworth upon being confronted with the portentous grandeur of this cathedral.  On the cloudy day of my visit, I could easily see the aptness of the description in Villette, “It was an old solemn church, its pervading gloom not gilded but purpled by light shed through stained glass” (Villette 147).  In the side isles of the nave some of the beautiful antique carved Confessionals were still on display – three on each side of the nave.  A thrill at the thought of Charlotte’s experience in one of these Confessionals made me stop in my tracks and examine the ornate carvings of the Confessionals more closely.  I bought a small medallion of St. Gudule in the gift shop before we left as a reminder of the day and of the experience.

The next stop was Waterloo in honor of the victory won there by Arthur Wellesley, 1st Duke of Wellington, and father of Arthur Adrian Wellesley, who young Charlotte Brontë turned into the Duke of Zamorna as the hero of her Angrian tales.  I began at the Wellington museum, which has been created at the inn where the Duke spent the night before the battle in 1815.  In the room where the Duke of Wellington had staid, a waxwork figured of him has been placed as if working at his desk, and it was a strange thrill on a Brontë-themed trip to see the portrait behind him labeled “Arthur Wellesley.”

Next I went out to the battlefield itself where I scaled the Lion Mount to view the surrounding fields.  It was difficult to imagine that such a horrible, bloody event had taken place on that peaceful, green farmland.  It was also remarkable to contemplate the number of works of literature that have taken inspiration form the events that took place at that field on June 18, 1815.  Many of my favorite novels, from Thackeray’s Vanity Fair to Tolstoy’s War and Peace to Hugo’s Les Miserables, have pivotal scenes set during and around the Battle of Waterloo.

The quick visits I was able to make to each of these spots only made me want to return and explore them with more leisure, and to see if I could not unearth other well-hidden Brontë sites in Brussels.  The beauty and interest of the sites made them all well worth the visit, and I would highly recommend such a trip to any other Brontë enthusiast!

FOLLOW THIS BLOG FREE - enter your email into this box