Several members of the Brussels Brontë Group attended the Brontë Society’s 2018 weekend of events in Haworth, this year celebrating Emily Brontë’s bicentenary. Our group included Guy and Evy Desloovere-Van de Voorde with their 8-month-old son Arthur Branwell – his first visit to the village of the family that inspired his name!

After an invitation to join Brontë Society trustees for chat, tea and cake in a restaurant in Main St, the weekend’s events kicked off with a presentation on the Brontë Parsonage Museum, now 90 years old. Ann Dinsdale, Principal Curator, and Jane Sellars, a former Director, talked us through highlights in the Museum’s history. Ann Dinsdale is the author of numerous books including At Home with the Brontës: The History of Haworth Parsonage & Its Occupants and The Brontës at Haworth. 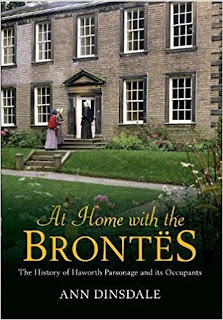 After dinner we were regaled by ‘an evening of all things Gothic’, a highly dramatic and hilarious one-woman entertainment by the amazing Lucy Adlington of the History Wardrobe, who commented on – and in some cases modelled – the costumes on show. Her romp through the Gothic in literature was interlarded with readings from the Brontës’ novels and other works such as Jane Austen’s Northanger Abbey. She is the author of several books on costume history.

The Eccentricities of ‘Woman’s Fantasy’

Saturday, the day of the Society’s AGM, is always packed with events. The first of these was a lecture on The Eccentricities of ‘Woman’s Fantasy’… and Heathcliff by Carol Dyhouse, a social history professor from the University of Sussex. Among other questions she looked at why Heathcliff is so often seen as a romantic hero and how far, if at all, this can be attributed to the novel itself as opposed to reinventions in screen versions of the book.

From the Gothic heroes of the Brontës’ novels and women’s fantasies to a sermon in the church where their father preached: the Brontë Society weekend certainly offers variety and a range of experiences. On Saturday morning – another tradition of the weekend – was a church service, led by the current Rector of Haworth, dedicated to the Brontës in the (rebuilt) church of St Michaels & All Angels. After lunch it was time for the Society’s AGM. The Society currently has around 1,800 members and employs over 40 staff at the Museum, which has just made a successful bid for significant Arts Council Funding as a National Portfolio Organisation. Possible future projects were discussed, for example the idea of turning a Victorian underground reservoir in Haworth into a centre for women’s writing. The perennial question of when the Museum is to build toilets for visitors also came up – when doesn’t it! At present visitors have to use the ones in the car park, threatened with closure.

The day wound up with a quiz hosted by Lucy Mangan, journalist and co-presenter of the BBC documentary Being the Brontës (March 2016). The competitors included museum staff and Society members.

Sunday was also a busy day. As usual, the museum opened at 9 a.m. for a private viewing by members. A highlight, continuing from last year which was Branwell Brontë’s bicentenary, is the recreation of Branwell’s bedroom, curated by creative partner Simon Armitage in collaboration with museum staff and the production team of the film To Walk Invisible. The installation, supposed to present the room as it might have been in the late 1830s when Branwell had ambitions to be an artist, features an unmade bed and artworks and other objects scattered in disorder.

The morning programme consisted of Brontë Treasures (a private viewing in the Parsonage library of treasures in the Museum collection) and a talk by me on Charlotte Brontë’s legacy in Belgium, the subject of my new book Through Belgian Eyes. Thus our group and its work were well represented at Haworth this year.

After lunch more energetic members joined a guided walk across the moors to Ponden Kirk, the rocky outcrop close to Top Withens supposedly the inspiration for Penistone Crag in Wuthering Heights. For those who didn’t feel up to this 9-mile walk there was a screening of the 1992 version of the novel with Ralph Fiennes and Juliet Binoche. A dinner and quiz rounded off the day.

The closing event was an excursion to Halifax on the Monday. After a tour of the Piece Hall, there was a visit to Halifax Minster and the former Holy Trinity Church to view sculptures by Branwell Brontë’s great friend Joseph Leyland. David Glover, President of Halifax Antiquarian Society, gave us a talk on Leyland’s life. Over a splendid tea at Holdsworth House Hotel, he gave another talk on Law Hill School near Halifax, the story of Jack Sharp, a member of a local family who may have inspired the character of Heathcliff, and High Sunderland Hall, a building often cited as a possible inspiration for Wuthering Heights.

I hope that many Brussels Group members will join me for the Brontë Society weekend in Haworth next year (8-9 June) to enjoy a rich programme of events and spend time not just in Haworth but in local places with Brontë connections.