The museum houses the world’s largest collection of Brontë material including letters, manuscripts, furniture, clothing, personal artefacts and artworks. There are over 7000 items in the collection which is a unique resource for academics from around the world. The treasures of the collection are displayed within the Parsonage which also draws general visitors and lovers of the Brontës’ books to Haworth in tens of thousands every year.

We are delighted to have been granted full accreditation. The Brontës are of course intimately associated with Haworth and Yorkshire, but the Parsonage museum has a collection which is nationally and internationally important and we should all celebrate that fact. The museum’s collection has continued to grow in recent years and through our education and arts programmes we’ve offered all kinds of exciting new ways for visitors to experience the museum and find out about the Brontës.

The museum is offering free admission to children every weekend in December and in January will close for a major refurbishment which will see the installation of a new exhibition focusing on the Brontës’ lives. The exhibition will include many new acquisitions to the collection and also fun interactives for families.

Posted by Richard Wilcocks at 10:08 am 0 comments
Email ThisBlogThis!Share to TwitterShare to FacebookShare to Pinterest

Christmas at the Parsonage

A news release from Jenna Holmes:

For those who feel the modern Christmas is just too commercial, the Brontë Parsonage Museum in Haworth is offering a taste of Christmas past over the next few weeks. The Parsonage rooms have been decorated in traditional holly and ivy and with children under 16 able to enter the museum completely free of charge every Saturday and Sunday in December, the museum is hoping to encourage families to come and experience the special festive feel of the Parsonage at this special time of year.

On Saturday 13 December, there’ll be some added festive spice with Branwell Brontë’s Christmas Cracker, which involves Branwell visiting the museum, with mulled wine and mince pies on offer. Branwell will be performing his own hilarious version of the Brontë story at 11.30am, 12.30pm, 1.30pm and 2.30pm. There’ll also be a special children’s Christmas treasure hunt.

The truth is that Christmas for the Brontës was very different because it was before the Victorians got their hands on it. It was a religious festival without a lot of the paraphernalia which has come along since.
We think the Brontë Christmas would have been much more civilized and if people are fed up with the modern commercial holiday, they should rediscover a simpler Christmas; come and get away from it all here at the museum. They can always get their Christmas gifts in the museum shop anyway, which has an excellent range of festive presents.

As well as festive decorations, Branwell, and Christmas gifts, visitors to the museum in December will be able to take part in an exciting new musical project. The Fragmented Orchestra takes place at 24 public sites across the UK, including the Brontë Parsonage Museum, and launches on Friday 12th December. Visitors will be invited to become both player and audience of a vast interactive musical composition extending across the UK.

December is also the last chance to see the museum’s special exhibition for 2008, Emily Brontë: No Coward Soul, which has attracted visitors from around the world. The exhibition is the first time ever that such an extensive range of manuscripts, letters, art works and personal artefacts relating to Emily Brontë has been displayed. The exhibition, which earlier in the year included high profile loans from the British Library and the National Portrait Gallery, will only run to the end of the year.

It's time again to make mention of Dickens's A Christmas Carol........

Charles Dickens first published his world-famous ghost story in 1843, under the title A Christmas Carol in Prose, Being a Ghost Story of Christmas.

A phenomenal six thousand copies were sold in the week following its publication. Dickens has probably had more influence on the way that we celebrate Christmas today than any single individual in human history except one.

Can he be blamed for the many millions of tons of seasonal decorations shipped in from China, though? That is, if they are still being shipped in during the current recession........perhaps we should be thinking of Tiny Tim as well as the Original Parsonage Christmas. End of sermon.

Below, the man who invented Christmas-as-we-know-it-today 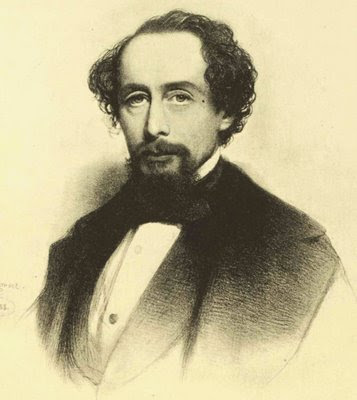