Chris Went writes:
Concerns have been raised that part of the grazing land at Weaver’s Hill may again be under threat of development.  The land, which is part of the green belt, abuts the lane to Oxenhope which, associated with Charlotte Brontë’s meetings with Arthur Bell Nicholls, is known locally as Charlotte’s Path.

Bradford Metropolitan District Council’s planning department has flagged the land as being potentially available for new housing as part of the Local Development Framework, but because it is green belt, any such use would only be permitted when all other possible sites had been exhausted.  Furthermore, land allocations under the LDF are still far from being finalised.

Recent newspaper reports suggest that the owner of the grazing land, whose application for development in 2008 was withdrawn, will shortly submit a revised application for planning permission for 120 homes.  Should this be successful, he would then launch a second phase of development involving a further 200 houses.

The Brontë Society fully supports Haworth’s prevalent view that green belt land must remain green.  Large numbers of new houses in this part of the village would have an extremely detrimental effect on its setting and would bring inappropriate development disturbingly close to the moorland fringes.    The local economy is founded on heritage tourism.  Anything which may undermine that economy must be examined closely and, if necessary, strongly rejected.

Posted by Richard Wilcocks at 8:45 pm 3 comments
Email ThisBlogThis!Share to TwitterShare to FacebookShare to Pinterest

Removing the shroud of mystery 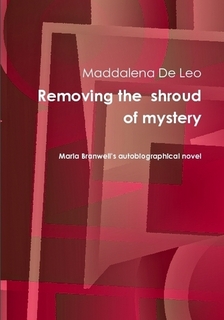 Professor Maddalena De Leo’s Italian novel Mai più in oscurità is now available in English. Its title is Removing the shroud of mystery and can be easily found and bought on the site: www.lulu.com by typing the name of its author or the title of the book in the space on the right of the page.

The novel is about Maria Branwell’s life and marks the 200th anniversary of the Brontë parents’ wedding (1812-2012).  Professor De Leo says in her Preface:
The early death of the Brontës’ mother and her birth in Cornwall, a land rich in myths and Celtic legends has always fascinated me. As a long time Brontë scholar, I recently visited Cornwall and Penzance, the towns where she was born and lived as a girl. Staying in this fabled land opened up to me a wealth of information, curiosities, doubts and speculations on a character still enshrouded in mystery.

My resources information and my own imagination enabled me to render a true portrait of Maria Branwell’s early life. Beginning with the first biographical episode dating from, I pieced together a biographical sketch starting from February 1850. This was when Charlotte Brontë was given by her father a small parcel of letters addressed to him by his future wife Maria during their engagement.I thought that maybe Charlotte Brontë conceived the ideas for her juvenile literature through this. In the diary Maria might have recorded the most significant episodes of her life so as to leave something of herself to posterity.

In the appendix I have included the unabridged text of the authentic letters by Maria Branwell not published since 1914 when they appeared in Clement Shorter’s book. Through this work I hope I put this precious jewel in its rightful place in the Brontë mosaic.

Posted by Richard Wilcocks at 11:48 am 0 comments
Email ThisBlogThis!Share to TwitterShare to FacebookShare to Pinterest 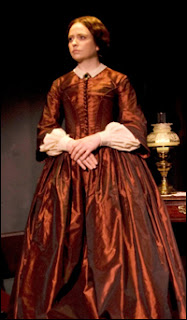 From the moment that the yearning music swelled to fill the space and the cloaked figure began her slow progression down the aisle towards the stage, the audience at the Off-Broadway Actors Temple Theatre was captivated.  The action of the play, Brontë: A Portrait of Charlotte, is set in June of 1849 as Charlotte returns home from her final trip to Scarborough with Anne.   Having just buried the last of her siblings, Charlotte is drawn to look back over her past life and share some reminiscences with the audience.

The text of play, by acclaimed playwright William Luce, is an elegant rendering of Charlotte Brontë based on her correspondence with school friend Ellen Nussey.  Although the play focused a little too heavily on Charlotte’s burgeoning relationship with Arthur Bell Nicholls, to the neglect of some other facets of her character that could have been explored, it did give a good overview of her life for audience members who may not have been familiar with the story behind the author of Jane Eyre.

Irish actress Maxine Linehan inhabited the role of Charlotte with compassion and grace.  The few points in the action when she would stop, put on her spectacles, sit down in a chair and simply begin a letter to 'Dear Nell' were some of the most poignant in the show.  All that was needed for Linehan to engage the audience was her sensitive presentation of Charlotte through the unadulterated words of her letters.

For further details on tickets: http://www.bronteoffbroadway.com/Bronte.html
The Actors Temple Theater is located at 339 West 47th Street.