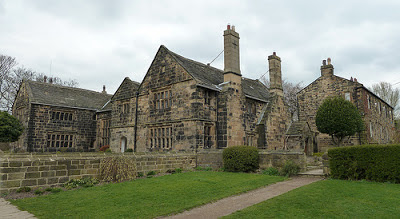 ‘”The old latticed windows, the stone porch, the walls, the roof, the chimney-stacks, were rich in crayon touches and sepia lights and shades.”

On Tuesday drizzle took the place of sunshine as we disembarked from our coach at Oakwell Hall. The hall was used in 1921 as the location for the silent version of Shirley and is a building which has survived from the late 16th and 17th centuries and was almost certainly built in the Elizabethan age by John Batt whose initials appear on the porch. Charlotte Brontë knew one of the Cockill girls who with her two sisters and mother, Hannah, occupied Oakwell from 1830-1865 and ran it as a girls’ boarding school

Charlotte must have been very familiar with the hall because in Shirley, ‘Fieldhead’, the home of the eponymous heroine incorporates many things that can still be seen in the house today:

‘”The brown panelled parlour was furnished in an old style, and with real old furniture. On each side of the high mantelpiece stood two antique chairs of oak.”

Every house with a long history has a ghost story to tell and Oakwell is no different. We were told of unknown figures appearing, of shelves being unscrewed from walls and of the bloody footprint which never disappeared- until the floor was taken up- despite the vigorous efforts of scrubbing brushes and soap and water! Anyone moving from room to room could have been forgiven for thinking that they had been transported back in time for the hall frequently entertains school children, and on that day groups of children, dressed in  Elizabethan style, were happily occupied in interesting looking activities.

They were making lavender bags, writing with quills and one eager little boy told me, as he was concentrating on winding wool round four sticks, that he was making some kind of lucky charm. We saw in the kitchen that the children had prepared vegetables which were in a suspended iron pot over the fire and which they would partake of later from wooden plates.

It was an interesting morning and in these times of cutbacks and talk of closures it is hoped others in years to come will have the same opportunities to enjoy Oakwell Hall. What really made the day for me was to see how deeply the school children were involved in the educational activities there.
Posted by Richard Wilcocks at 8:11 pm 1 comments
Email ThisBlogThis!Share to TwitterShare to FacebookShare to Pinterest

IMS writes:
After a warm and sunny weekend, full of interesting events, where friendships were renewed and new ones made, members travelled up the A65 - the destination Levens Hall near Kendal. The very understanding coach driver incurred the wrath of an impatient motorist –lights flashing, horn beeping- as he slowed down to enable his passengers to catch a glimpse of the Reverend Carus Wilson’s school building in Cowan Bridge, which the four eldest Brontë girls attended in 1824/5.

Passing over the busy M6 we soon arrived at the Hall- the building of which is divided into three periods. A Pele tower was built firstly in the thirteenth century, the second period was in the sixteenth century when the mediaeval structure was turned into a gentleman’s residence. The last period in the seventeenth century was when the South wing and brew house were added and the house exquisitely furnished. The rooms, resplendent with Elizabethan plasterwork and panelling, contained treasures such as beautiful Charles II gilded brass candle sconces and a George I burr walnut long case clock. There was furniture dating from the William and Mary period to an early nineteenth century. In each room pictures by painters of note, such as Rubens and Peter de Wint, and drawings by Edward Burne Jones, adorned the walls. 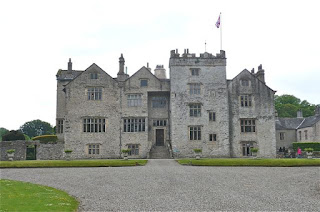 Moving around the house it became obvious that there were perhaps some tentative connections with the Brontës. It was thought that Colonel James Grahme - who married, in 1675, Dorothy Howard, one of the maids of honour to Catherine of Braganza and a daughter of the Levens Hall family -  had been born at Norton Conyers. The Graham family still live there today and Charlotte visited when she was governess to the Sidgwick family.

At the hall there is a charcoal drawing and a watercolour by George Richmond, the very same painter who painted Charlotte’s portrait in 1850. It is well known that Charlotte had been thrilled to see, in the flesh, her hero the Duke of Wellington in the Chapel Royal when she was taken there by George Smith. Wellington’s favourite niece, Lady Mary Wellesley, married Sir Charles Bagot of Levens and there were many items relating to Wellington given by him to Mary and in one of the bedrooms is his campaign bed. Many houses of this ilk attract the media and are used for films and television programmes and Levens is no different -  film versions of The Tenant of Wildfell Hall and Mrs Gaskell’s Wives and Daughters were made at the hall in the nineteen nineties.

Visitors can wander outside through herb gardens and pleached lime tunnels lead to a pond and fountain and in a quiet corner there are headstones where beloved family pets with the names of Tarka, Sheba and Jock are buried. Dominating all these features are the yew trees at various stages of their development into fantastic topiary shapes- the great umbrella dwarfing everything else and apparently requiring the use of scaffolding for trimming.

The next step of the Monday excursion was down narrow country lanes which led to Lindeth Tower in Silverdale and which afforded a wonderful view of Morecambe Bay looking across to Grange over Sands. Mrs Gaskell first visited Grange in 1836 and with her growing family made an annual migration to the seaside and stayed in the Tower House- which was built in 1842.  The Gaskells and other Manchester families who often stayed in Silverdale would, before 1846, travel by train only as far as Lancaster. After that date it would have been possible to get by train to Carnforth- the station made famous by the emotional film Brief Encounter.  A carriage ride would then bring them to Silverdale which, with its sense of isolation and peace, Mrs Gaskell is said to have enjoyed. In 1858 she wrote, “One is never disappointed in coming back to Silverdale”.

It was my first visit to the area and I was not disappointed!

Posted by Richard Wilcocks at 7:53 pm 1 comments
Email ThisBlogThis!Share to TwitterShare to FacebookShare to Pinterest

This year's annual lecture was given not by an academic but by an enthusiastic local historian - Steve Wood. It was accompanied by a fascinating selection of slides, some of which came as a surprise for many members of the audience in the Baptist chapel, an appropriate space for events like this because it is like a compact theatre.

The subject was The History of the Withins Farms, 1567-1930 . Most Society members tramp up to Top Withins at some time, usually in good weather. Steve Wood read a few minds when he suggested that perhaps we should have made good use of the fact that the moors around Haworth and Stanbury were significantly bucolic and that the talk should have taken place on the tops, near the set of restored ruins which are possibly one of the inspirations for Wuthering Heights. But then it would have been awkward for him to show us the old photos, and the drawings.

We saw a set of three farms in various states of repair - not only Top Withins, but Middle Withins and Low Withins as well. Only Top Withins remains, the other two having been demolished. Steve gave us a brief survey of the families which had once survived up there, some of them managing hay meadows and keeping cattle, some of them installing hen coops and pigsties. The animals had to come in with the human inhabitants, separated by walls and doors. We saw the careful plans which Steve had drawn. It would have been almost comfortable in winter in the bothy, near the beasts' heat. In one photo, oatcakes could be seen, draped over a beam to dry. They lived mainly on porridge and oatcakes, it seems. Even the dogs were served porridge.

The 'upkeep' of Top Withins farm, if it can be called that, has often been insensitive and neglectful: Keighley Town Council once made interventions, cut stones were stolen - a Yorkshire tradition going back to the Dissolution of the Monasteries and before - and various charitable parties turned up to do something, notably a class of schoolchildren from Barnsley. At one time, it was covered with names and graffiti, not the work of early members of the Brontë Society, I hope and trust. The sycamores have lasted well. Yorkshire Water bureaucrats are currently the keepers: they own just about everything on the moors around here, and have strong views on the keeping of farm animals, because of concerns about water pollution. Sheep have escaped their gaze.

There was plenty of it left when Sylvia Plath drew it, which shows the extent of the recent deterioration. The views are still stunning, but will change soon when tall new wind turbines appear on the horizon. It is, of course, still a popular tourist destination, and the paths are well looked after. Most walkers today might wear fleeces and anoraks - not so a century ago. One photo showed a group of mostly male members of the Brontë Society looking into the farm's open windows dressed in dark suits and bowler (derby) hats. The women with them were wearing long Edwardian dresses a couple of inches up from the turf and huge, elaborate headgear. They had style in those days.

Posted by Richard Wilcocks at 11:26 am 2 comments
Email ThisBlogThis!Share to TwitterShare to FacebookShare to Pinterest

The weather was unbelievably warm and windless. All the events should be held out in the open - possibly in the meadow behind the Parsonage - or so it was often said, humorously. All of the delegates were full to the brim with good humour. Here's a slideshow of just a few of them:

The forgotten Brontë sibling will get his time in the spotlight on Friday with a performance of award-winning play The Brontë Boy in the Baptist Centre.

Former Bradford Telegraph & Argus journalist Michael Yates wrote the play about Branwell Brontë three years ago, and a performance will form part of the coming AGM weekend. The play starts at 7.30pm at the Baptist Centre. Tickets for the performance plus a cheese, wine and paté supper are available from bronte.org. uk.