This is the advertisement for the event, which is not organised by the Brontë Society:


Walk and Worship the Brontë Way

The Vicar of Tunstall, The Revd Carus Wilson set up the Clergy Daughters’ School at Cowan Bridge in January 1824 which Charlotte Bronte and three of her sisters attended  before the elder sisters, Maria and Elizabeth died of consumption in 1825.She subsequently drew on her memories of this experience as the basis for ‘ Lowood School’ in  Jane Eyre. In 1824 all pupils walked to Tunstall Church for Matins- apparently Leck church was not large enough- ate a packed lunch in a room over the porch ( a parvise) and attended Evensong before returning to Cowan Bridge. In 1825 the latter church was expanded and the pupils were saved this long walk.

On Sunday 6 July it is proposed to commemorate this experience by services in both churches starting with Holy Communion at 8am in Leck, St Peter’s Church (car parking available), followed by a visit to the ‘fever’ graves of some of the pupils of the Clergy Daughters’ School.

Those who cannot attend this service can go to the Fraser Hall, Cowan Bridge, where all will assemble to leave as a group at 9.30am ( drinks will be available). The group will then walk to Tunstall following the same route the girls did. (Please wear suitable clothing and footwear) Matins will be held at Tunstall at 11am. The service will be in the style of the period. Bring a packed lunch to eat in the comfort of Tunstall Village Hall-where drinks will be available prior to the return walk.

Refreshments will be then available in the Fraser Hall, Cowan Bridge prior to Evensong at 4.30pm at St Peter’s Leck. As little or as much as you wish, of the Pilgrimage, can be undertaken.
Posted by Richard Wilcocks at 10:53 am 0 comments
Email ThisBlogThis!Share to TwitterShare to FacebookShare to Pinterest

Spring Walk from Wycoller Hall on 11 May

The walk is approximately five miles long - and will include Clam Bridge, Walton's Cross, waterfalls and splendid panoramic views from the Panopticon.
Tickets are £5 and can be bought either by cheque in advance (payable to The Brontë Society) or can be purchased on the day with cash or on http://www.bronte.org.uk/whats-on/117/spring-walk-2014/119
A car park is available at Wycoller Country Park. 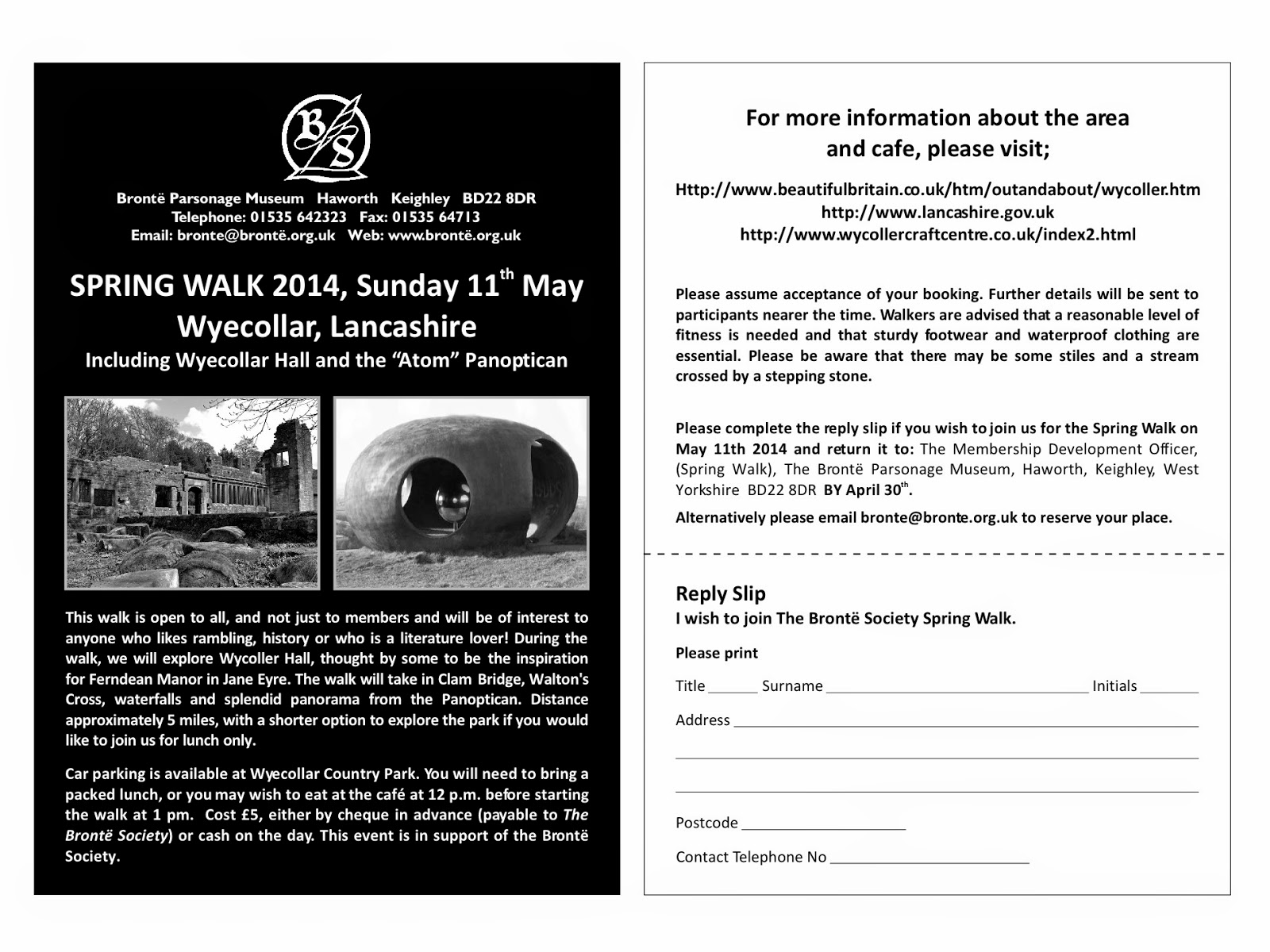 Review by Elisa Fierro
“Reader, I did not marry him.” This is the arresting beginning of Vanessa Gebbie’s Chapter XXXVIII – Conclusion (and a little bit of added cookery) with abject apologies to Charlotte Brontë, one of the short stories in the new collection Red Room: New Short Stories Inspired by the Brontës (ISBN 978-0-9572897-3-4).

Red Room, edited by A. J. Ashworth and published in paperback by Unthank Books in 2013, is comprised of twelve short stories and a poem, written by some of Britain’s best contemporary writers to celebrate the Brontë sisters and their unexhausted modernism. According to the editor, part of the sale profits of the book will be donated to the Brontë Birthplace Trust to help spread awareness of both the village and the building where the three sisters and their brother, Branwell, were born.

The Brontë Birthplace, located at 72/74 Market Street in Thornton (West Yorkshire), was a museum until 2007, thanks to the passion of the late novelist Barbara Whitehead. After being sold, it has recently become a café. At the time of the sale, the Brontë Birthplace Trust was raising the necessary funds to acquire the building, and their mission is now to try to secure it at a future date for Brontë lovers worldwide.

This collection of short stories, Red Room, is a continued commitment of Unthank Books towards contemporary short fiction and classic literature. The contributors – all writers of remarkable standing in contemporary British literature and winners of prestigious awards like, for example, the BBC National Short Story Award - have all waived their fees. Their generosity is shared by Unthank Books, as mentioned earlier, to help the Trust give the Brontë Birthplace its deserved position among the most important literary birthplaces in the world.

The Brontës and their work inspire all of the carefully crafted stories in Red Room, but a previous knowledge of the sisters’ novels – although certainly desirable – is not absolutely necessary in order to enjoy this book.  Everybody can find something to his or her taste: the authors deal with a variety of themes (from children abuse to supernatural sheep), write in different styles, and set their stories in the past as well as in the present, showing how human traits and situations described by the three sisters transcend time and place.

The previously mentioned Chapter XXXVIII – Conclusion (and a little bit of added cookery) with abject apologies to Charlotte Brontë, by Vanessa Gebbie, offers a humorously alternative ending to Jane Eyre, where Jane and Rochester do not marry but live as companions, while Rochester develops an interest for cooking with a penchant for oddly mixed ingredients (after all, he is blind!). The author’s (never random) good humor – through Jane’s first person narrative – doesn’t spare any character of the novel, including St John Rivers, whose fate is described in a way highly appropriate for him: “St John is unmarried: he never will marry now (Who would marry him, reader? Look at the verbiage up with which one would have to put)”.

Modern values are the theme of Rowena Macdonald’s A Child of Pleasure. Inspired by the relationship between Lucy Snow and Ginevra Fanshawe in Villette, the story is about Liza Frost, a teacher giving private lessons, and Jemima Fenchurch, her student. Jemima is not in the least interested in passing her exam, and often tries to demean Liza by pointing out her plain appearance, her solitary life, and her lack of wealth. Jemima is “about as sensitive as a brick”, has been indulged all her life, is self-centered, and only believes in beauty and money. However, at the end of the story, Liz and the reader are left wondering if, after all, Jemima was right. “I had been wrong: she was nobody’s appendage” – don’t we all want to be a celebrity like her, without a care in this world and sure that we will “suffer as little as any human being I have ever known”?

Heart-rending is the atmosphere of Carys Davies’ Bonnet.  The headwear of the title is one that Charlotte, on her way to meet her publisher George Smith in London, has embellished with a new lining, “a lustrous, pearly pink like the interior of a shell”. Smith has written Charlotte a letter telling her about his recent engagement – a letter that she had not yet received when she embarked on her trip. In reality, the trip never took place, because at the time Charlotte had stopped going to London to see her publisher. However, there has always been much speculation about the feelings that Charlotte might have entertained for the young, charming George. They were certainly friends, and it is possible that she – bereft and alone after the death of all her siblings – might have hoped to have him as life companion. Throughout the story, Charlotte is acutely aware of her plain appearance and clothing, especially during the meeting: “…  it is the worst imaginable thing for her to sit and feel the bright new silk around her face, like a shout, and see how embarrassed he is, how he can’t look at it.” In Victorian England, like today in our modern, multicultural, open-minded society (sarcasm intended), there is an incredible amount of pressure for women to be physically attractive. It takes a lot of self-esteem not to feel, like Charlotte, “always always acutely and painfully conscious” of the way we look as opposed to the way we are expected to look. I am sure that many women can relate to that – I for one certainly do.

I have chosen to use these three stories to illustrate how varied and multifaceted the collection Red Room actually is, and it is a totally subjective choice. I do not doubt that every reader will find his or her favorites, as the rest of the stories combine elements of fiction, realism, fantasy, even fairy-tale, and are filled with characters who, while based on the Brontë works, are strong in their own right.

In My Dear Miss … Zoë King imagines a lively epistolary exchange between Jane Eyre and Emma Woodhouse, where the latter – faithful to her character – tries to set Jane up with “a certain young clergyman, Mr. Elton, a handsome and intelligent addition to our circle.”

Contrasting with this playfulness are Sarah Dobbs’ Behind all the Closed Doors, dealing with the loss of a parent at a very early age, and Alison Moore’s Stonecrop, where an abusive stepfather gets what he deserves from his young victim.

On the other hand, stories like The Curate’s Wife, by Felicity Skelton, will appeal to lovers of historical fiction and romance, for its depiction of a fortuitous meeting between Charlotte and a well-known historical character – with interesting consequences.

Subsequently, Ashton and Elaine, by David Constantine, is a fairy-tale version of Heathcliff and Catherine’s story in which an adopted child finds a loving family and a supportive teacher, so that we can all be hopeful for him and his future.

Although the stories show a variety of subjects, two elements tie them all together: their authors’ captivating imaginations and their desire to bring the Brontë sisters to a wide modern audience, an audience who might or might not have a good literary background knowledge. At the end of the book, actually, the reader with less familiarity with the Brontës will find help with understanding the context of each story in the final section, entitled Inspirations, where every author explains how he or she came to write that particular piece of short fiction.


Being a Brontë lover myself, I am always an avid reader of anything related to the sisters and am sometimes disappointed by what is published; but this collection did not disappoint! The works in this book show how modern the Brontës will always be, how they can still inspire good literature, how the characters they created can and shall hook a contemporary reader, and make him or her reflect on the human condition. Charlotte, Emily, and Anne are alive and well, and they are waiting for you in the Red Room.

(Elissa Fierro is Representative of the Heartland West Region, one of the American Chapters of the Brontë Society. She teaches Italian at the University of Kansas in Lawrence.)