This Friday’s event for A Brontë-themed Christmas in Mirfield (mainly organised by Imelda and Catherine Marsden) takes place at St Paul’s Church, Eastthorpe, Mirfield. It begins at 7.30pm.

Tickets at ten pounds (includes refreshments) can be obtained from the Kirklees Brontë Group: phone 01924 519370 or send a stamped, addressed envelope to 18 Quarry Fields, Mirfield, WF14 0NT  Proceeds go to two children’s charities.
The History Wardrobe will be there with a costume presentation on Jane Eyre, the Best Dressed Governess, during the interval Christmas hymns and carols will be sung, and the second half will be given over to the terrific jazz vocalist Val Wiseman, who will sing from her Brontë album.
Below, Val Wiseman singing in Dewsbury Minster last year: 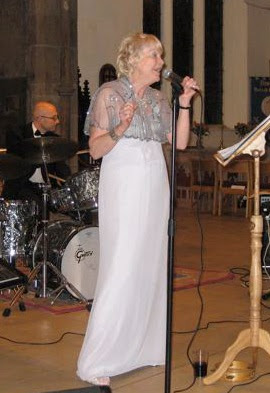 Posted by Richard Wilcocks at 11:39 am 0 comments
Email ThisBlogThis!Share to TwitterShare to FacebookShare to Pinterest

Dutch journalist Jolien Janzing visited Haworth earlier this year to research her forthcoming novel about the Brontës in Brussels. She writes that she is continuing with the research in Brussels, and that the novel will be published at about this time next year, by De Arbeiderspers in Amsterdam, a renowned literary publisher. Here is her article, translated and introduced by Helen MacEwan from the Brussels Brontë Group. It appeared originally on that group's blog in October. We are looking forward to the English version of the novel!


This is a translation of an article by Jolien Janzing originally published in Dutch in the Belgian newspaper De Standaard Der Letteren on 13 August 2010 about a trip to Haworth to research a novel she is writing about the Brontës in Brussels. While there, Jolien met various people in the village including the director of the Brontë Parsonage Museum, the parish priest and a guide who does Brontë walks.

Juliet Barker at the Parsonage 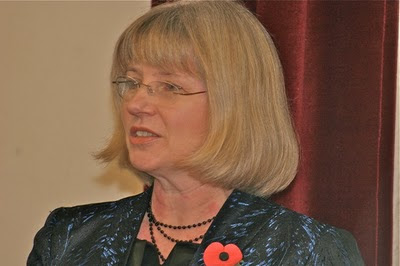 Richard Wilcocks writes:
Juliet Barker launched the new, revised version of her biography The Brontës, a work normally described, justifiably, as ‘definitive’, on Friday 12 November. She spoke in the Old Schoolroom, all steel and efficiency blended with easy charm, at ease with the tiniest details and the widest speculations. The corrections seem to have been small-scale: “I had many offers of corrections after the first publication in 1994 – and some were taken more seriously than others…

Some letters were redated, others added… and perhaps my worst confession is that I got the wrong Bishop of Ripon, the one who took the grand confirmation service…but it should be easier to read, because the font size has been increased, and there’s more space between lines…
It was originally written to be printed in two volumes but this couldn’t be done, I was told, because it would mean two expensive covers, and the publisher thought that people would buy only one volume and not the other… so it’s still rather large and hard to hold when you’re reading in bed…
I must give my thanks to Parsonage staff who have alerted me to new acquisitions…”
She revealed that she had learned much from Patsy Stoneman’s book on dramatised versions ('Jane Eyre' on Stage, 1848-1882) and that she had laughed out loud at some of the comic scenes in it. She spoke about her special interest in Charlotte’s desire to become an artist, pointing out the fact that two of her paintings – ‘Bolton Abbey’ and ‘Kirkstall Abbey’ had been submitted to the Royal Northern Society for the Encouragement of the Arts for inclusion in its summer exhibition of 1834, which was held in Leeds. They were accepted, and for the eighteen year-old Charlotte, it was a dream come true, with the whole family making the journey to the big city to see her works hanging alongside those of JMW Turner. They had not sold, however, and are now (still) hanging in the Parsonage.
She also touched on her revelation that Branwell never went to the Royal Academy, adding briefly a few brief speculative thoughts about his putative mistresses.
ISBN 978-0-349-12242-7
Posted by Richard Wilcocks at 2:31 pm 1 comments
Email ThisBlogThis!Share to TwitterShare to FacebookShare to Pinterest

Richard Wilcocks writes:
This blog regularly receives emails and comments (which appear below posts made in previous years) about the activities of Haworth's energetic wheel-clampers, based at the Changegate car park. Just in case you are new to this depressing saga, the advice is to park your vehicle elsewhere, for example in the Parsonage car park run by Bradford. You might also be interested in a website which gives excellent and comprehensive advice on penalties and any legal recourses which might be available to you: click here.

If you do take legal action, for example in a small claims court, please let us know what happens.
Posted by Richard Wilcocks at 11:50 am 2 comments
Email ThisBlogThis!Share to TwitterShare to FacebookShare to Pinterest

An evening with Juliet Barker

Biographer Juliet Barker will be launching the much-awaited revised edition of her landmark biography The Brontës at the Parsonage on Friday 12 November.
The Brontës, first published in 1994, was a radical reassessment of the Brontë family and remains the definitive study of their lives and works. Juliet Barker is publishing a revised and updated version of the book and will be launching this new edition at a very special evening at the Parsonage. She will be speaking about her revisions, newly discovered material, and the impact of the book at The Old Schoolroom on Church St, followed by a book signing and a drinks reception.
The event will also be a special opportunity to visit the museum after hours, to see some of the museum’s current exhibitions, including the contemporary arts exhibition Remnants by artist Su Blackwell, and the Sex, Drugs and Literature exhibition which focuses on Branwell Brontë.
Tickets for the evening cost £12 can be booked from the Arts Officer:jenna.holmes@bronte.org.uk / 01535 640188.
Posted by Richard Wilcocks at 1:17 pm 0 comments
Email ThisBlogThis!Share to TwitterShare to FacebookShare to Pinterest
Newer Posts Older Posts Home
Subscribe to: Posts (Atom)