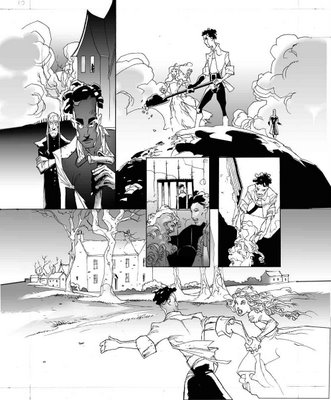 A page from the new Wuthering Heights graphic novel


As part of a season of events to paint Haworth's literary sisters in a whole new light, a brand new adaptation of Wuthering Heights is released next month - in graphic novel form.

David Barnett, Features Editor of the Bradford Telegraph and Argus spoke to Richard Wilcocks about his article, which appeared in the paper last week and which is reproduced below. He was asked to define a "Brontë purist" and his reply was:

As far as what I meant by a Brontë purist... possibly a fan of the Brontës' work who might not consider a (necessary) abridgement of the source text for adaptation purposes a positive move. Whether such people exist outside of the brains of journalists is a point for debate.


The Parsonage's Arts programme is 'radical' anyway (see previous postings, for example those relating to Cornelia Parker) so it should fit in well with the Radical Brontës Festival opening in Bradford in September. Here is the article, which has appeared on the B & A's website at

It's often said that if Shakespeare was alive today, he'd be writing comic books. No longer the preserve of unfeasibly muscle-bound crimefighters in tights or funny talking animals, comics - or graphic novels, to give them their grown-up name - are now considered to be a valid, adult form of storytelling.

Go into Waterstone's in Bradford and there's a whole section devoted to contemporary comics, from the high-octane and often violent Japanese manga to the off-kilter monochromatic nightmares of Charles Burns to the fabulist source material of many major recent blockbuster movies such as V for Vendetta, Sin City, From Hell and Road to Perdition.

A fine addition to this canon is a graphic novel that adapts Emily Brontë's classic and much-loved novel Wuthering Heights. With its generous helping of sex, violence and death, its rain-streaked, barren backdrop of the Haworth moors, its gothic obsessions, make it a perfect topic for comic book treatment.

The book has been specially commissioned for the Radical Brontës Festival, which runs from September 15-24 and, as its name suggests, aims to paint the women and their work in a very different light to the common misconceptions surrounding them - that they are cosy, romantic novels written by genteel sisters with nothing better to do.


Graphic novels generally begin life as a script produced by a writer with dialogue and "stage directions" for the artist to interpret in a series of sequential panels, which was why Keith Jeffrey, who is heading the umbrella initiative Illuminate, under which Radical Brontës falls, brought West Yorkshire poet and playwright Adam Strickson on board.

Adam says: "Keith knew I was a Brontë enthusiast and got in touch. My first reaction was I don't know anything about graphic novels', but when I started looking into it I realised it wasn't too distant to scriptwriting for the stage."

Adam, who has worked as director of inter-cultural stage company Chol Theatre and had a writer's placement at Birmingham Repertory earlier this year, then had to break down Emily's original novel into a narrative suitable for the comic book treatment.

So what will Brontë purists make of his adaptation? "It is quite a complicated story when you get into it," says Adam. "There are a lot of flashbacks and I had to do away with a lot of the long narrative passages but at the same time keep to the style and preserve the language of the novel.

"But by and large, I think I've been fairly faithful to the original while endeavouring to keep the pace moving. I'm not really worried that I'll upset the Bronte faithful because there haven't been any major changes to the story."

He is hoping that those already fans of the Brontës will enjoy this fresh take on the book, while at the same time the format might draw other people who have never read the original into Emily's text.

For the art duties, an industry professional who will doubtless help the book cause a stir within the comics fraternity was commissioned. Siku is a Leicester-born artist who went to Nigeria at an early age and mastered his craft there. He has worked in commercial graphic design and computer games design, but is perhaps most well known for his work on the pioneering British science fiction comic 2000AD, for which he has illustrated a variety of strips including the comic's flagship character, Judge Dredd.

Siku's work has an almost dreamlike quality to it, heavily shadowed and perfect for the gothic tragedy of Heathcliff and Cathy. His art is quite unique in the mainstream comics world, eschewing the god-like anatomy usually associated with superheroes for a more elongated, almost otherworldy effect - sometimes to the annoyance of fans. Before he was accepted as a contemporary master of painted comics, he received hate-mail from fans who didn't like the way he drew Judge Dredd's famous jaw!

Siku says: "I suspect it was the moodiness of my work and the heavy amounts of shadow and black, which drew Keith Jeffrey to me. The gothic story actually suits what you might call my sci-fi' style."

In keeping with the original text, which describes moody anti-hero Heathcliff as the "child of a Lascar" (Asian seaman) or a "gypsy" - a fact often ignored in movie and TV adaptations - Siku wanted to highlight what he saw as the character's exotic nature.

He says: "I was always aware when working on the book that I was adapting a classic story - it's a great project to work on and I'm exceptionally proud of my work on Wuthering Heights."

Whether the Brontës' father Patrick would have allowed comics or graphic novels - had they existed in those days - into the Parsonage as suitable reading matter is a moot point. A new take on a classic story has been created, and might possibly create a mutual respect between graphic novel fans and Bronte enthusiasts.

Wuthering Heights: The Graphic Novel will be launched at Waterstone's in Bradford on Saturday, September 16.
Posted by Richard Wilcocks at 9:59 am 1 comments
Email ThisBlogThis!Share to TwitterShare to FacebookShare to Pinterest

Catching up on the details of the ‘other’ news after flying back to England, I see that last Wednesday’s Guardian carried an article headed Minister secures place of ‘heritage’ novels on schools list.

Two of the Brontë sisters, we are told, will be staying in the Key Stage 3 (11 - 14) curriculum, along with Austen, Dickens and Trollope, and George Orwell, Ernest Hemingway and Doris Lessing ‘may be removed’. So that’s Charlotte and Emily in, Anne out, Animal Farm no longer essential.

I like to flatter myself that the Education Secretary Alan Johnson was deeply moved by the interview with me on page three of the previous Friday’s Times Education Supplement, so much so that he rushed to his publicity department to prepare a statement, but of course everything must have been put in motion months previously. If he was moved by anything, it would have been by charges that the government dumbs things down in the curriculum.

Probably , the news release was just another item on the normal August agenda for Johnson and the newspapers. Advanced level (taken by 18 year-olds just before starting higher education) examination results come out on Thursday, and as usual some of the newspapers will take note of a large number of A grades and leap to accuse schools, examination boards and the government of dumbing things down to make things easier. Perish the thought that students could be working harder.

Editors might feel the need to take a break from pictures of airline passengers clasping little plastic bags or stories about conflict in the Middle East.

Therefore, it is a good strategy for the minister to get in shortly beforehand to make sure that the public registers the fact that the national heritage is being promoted and that the government is not in favour of dumbing down.

In fact, all that will happen is that a long list of prescribed authors will be tweaked. It does not mean that the current situation will automatically improve, or that the problem with what is termed ‘extended reading’ will be adequately addressed.

It is relatively easy to make a list, harder to deliver proper sympathetic advice to teachers to make sure that it is well used. And if you happen to be a teacher or lecturer reading this, remember that the Parsonage does supply that sort of advice.
Posted by Richard Wilcocks at 1:59 pm 0 comments
Email ThisBlogThis!Share to TwitterShare to FacebookShare to Pinterest

A lucky and unforeseen meeting 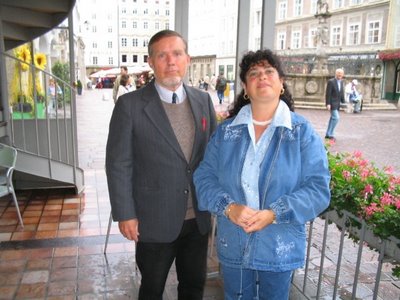 I chose to spend my holidays in August this year to celebrate the two hundred and fiftieth anniversary of Mozart’s birth.

Just a week before leaving I received a letter from Wilhering, a market town near Linz in Upper Austria, in which a certain Mr Kent Shire, an ESL teacher, complimented me on my article about Brontë-Shakespearean research in the July 2005 Brontë Studies. He found that my five methods of comparison between the two authors sounded straightforward and interesting and, since he is a new member of the Brontë Society, that he would like to read a fuller version of my work, originally written in 1982.

I knew I would have stayed in Salzburg for two whole days, so I immediately answered by priority mail telling Mr Shire about the possibility of meeting in Mozart’s celebrated town of birth. We met on 7th August in front of Mozart’s birthplace.

As soon as we were leisurely seated in the famous Cafè Tomaselli for an Austrian tea, I and Mr Shire had a very pleasant and interesting Brontë talk ranging over many topics. An American by birth, he has been living in Austria for fifteen years where he now has family and teaches English as a foreign language.

It was for him the first time he had met a fellow member of the Brontë Society - even in Austria. In the space of an hour, we talked a lot about Emily and her wonderful novel, the theme of which we both agreed is mainly love, not just hatred and revenge. We also discussed our role as teachers in conveying what Brontë knowledge and culture we can in both Austrian and Italian schools.

At the end of our literary chat, he was kind enough to hand me a precious little book of Emily’s poems in German and English that he signed as a momento of that lucky and unforeseen meeting.

Although it rained all the time, the Brontës lit up my stay in Salzburg!
Posted by Richard Wilcocks at 11:17 am 0 comments
Email ThisBlogThis!Share to TwitterShare to FacebookShare to Pinterest
Newer Posts Older Posts Home
Subscribe to: Posts (Atom)