Pamela Nash writes:
In Charlotte Brontë's Villette, the protagonist Lucy Snowe wrestled with the grief of unattainable love and "dreamed strangely of disturbed earth, and of hair, still golden and living, obtruded through coffin chinks." A family record passed down to the composer Robin Walker echoes the imagery: his great-great-grandfather, in attending Charlotte's funeral, recalled seeing a violet-coloured (hair?) ribbon hanging out of her coffin*.  A potent yet simple detail which provides for us a rarefied token of a tragic end, and whilst the Villette comparison lends a further frisson to the pathos of her death, the real tragedy perhaps lies in the paradox between the unrequited love in the pages of the author's work and that played out in her own life; while Lucy Snowe managed to repress the tyranny of desire - the “bottled storm” - Charlotte Brontë herself could not, as her letters to Constantin Heger reveal.

Nothwithstanding his ancestral connection, Robin Walker finds a powerful artistic affinity with Charlotte through these letters to Heger, and in commemoration of her bicentenary, he has composed a song setting of two of the letters for soprano and piano.  Having also produced a song-cycle of five of Emily Brontë's poems (premiered in 2014), he continues to draw inspiration and solace from the work of both sisters, arising partly out of a sense of “fellow feeling” and partly out of the absolute contemporary relevance of their work to him as a composer.  He identifies particularly with the emotional evaluation within their writing - the processing of experience through feeling - and, like the Brontës, his own compositional processes are founded in an instinctual response to both discipline and passion.

It is the meeting of these elements which forms the equilibrium in the new song: although structurally a conflation of the two Heger letters, the wording is completely preserved and the approach to crafting the music reflective of the letters' own expressive shape: “introduction - desperate statement - then, calm.”   Robin's response to the texts was nothing short of visceral: “I felt the force, the beating heart; that completely understandable rage at unrequited love for a man who gave her a unique taste of power and affection.”  What interested him most however - and what he dramatised in the song - was the conflict within Charlotte's “inner life”: behind all her expostulating was a desperate need to escape the stifling constraints of Protestantism and the patriarchy of her father.  “She is externalising her own drama, with the purpose of relieving herself; through writing the letters, Charlotte overcomes her state of mind - from a state of uncertainty and turbulence to one of stability and sanity, but with literary restraint and structural control.  That containment and rationalising of the emotional response is the same process that we as composers have to undergo in order to make it recognisable as emotion to others: the transmutation of what it is to be alive, into an artefact.”

Posted by Richard Wilcocks at 2:12 pm 1 comments
Email ThisBlogThis!Share to TwitterShare to FacebookShare to Pinterest

Winifred Gérin, biographer of the Brontës 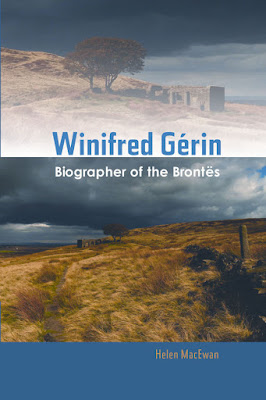 To celebrate the Brontë bicentenaries, Helen MacEwan has written a new book exploring the life of one of their most important biographers. On 21 November at Waterstones Piccadilly, she will be launching Winifred Gérin, biographer of the Brontës (publication date 15 November).

Having written about the Brontës in Brussels, Helen first became interested in Gérin’s life story because of her Belgian links and her special interest in Charlotte Brontë’s Brussels period.

Winifred Gérin (1901-81) is known as the biographer who moved to Haworth to write the lives of all four Brontë siblings, literally treading in their footsteps as she researched them. But her ten years in Haworth were just part of a romantic, eventful and sometimes tragic life.

Marriage to a Belgian cellist, Eugène Gérin, took her to Paris and then, in 1939, to Brussels where the couple worked for the British Embassy. Following the German invasion of 1940 they had various hair-raising adventures in France, finally escaping to Britain where they worked for Political Intelligence. After Eugène Gérin’s death in 1945, Winifred sought consolation in writing poetry and plays until discovering both her literary vocation and second love on a fateful first visit to Haworth.

Gérin went on to write biographies of Elizabeth Gaskell, Anne Thackeray Ritchie and Horatia Nelson. She also wrote plays about Jane Austen, Fanny Burney and Charlotte Brontë. This book is based on her letters and her unpublished memoir.

This is a comprehensive biography to enjoy and admire. Harman writes well and she is a fine and sensitive critic (The Times)

Finely judged and authoritative (Sunday Times Book of the Week)

Harman tells [Charlotte's] story with quick wit, a sharp sympathy, and a fire and fury of her own (Evening Standard)

Full of pleasing and piquant detail, scraps of passing recollection assembled from the various lives and letters in which the Brontes featured and from which we might reconstruct their world (Financial Times)

An extraordinary book, crammed with scholarship and glittering with trivia . . . Harman's book offers so many delights . . . This is a fantastic compendium (Independent on Sunday on 'Jane's Fame')

A shrewd but unstuffy critic, Harman's prose rings with good sense, affection and humour... [She] manages to be not only scholarly, but indecently entertaining. (Daily Mail on 'Jane's Fame')

Rich and colourful...Harman's book is a delight from beginning to end... This superb biography not only handles the familiar material with flair but goes further than previous biographies (Sunday Times on 'Robert Louis Stevenson: A Biography')

Superbly readable... she has excellent taste. A marvellous and eventful read (Evening Standard on 'Robert Louis Stevenson: A Biography')

There is no doubt that Harman is the first to treat this fascinating subject in an accessible, lively manner unshackled by academic jargon. It's the quality of the insights and the interpretations that make this book such a good read (Sunday Telegraph on Jane's Fame) 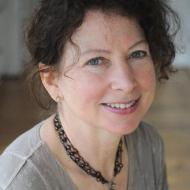 Claire Harman is the award-winning biographer of Sylvia Townsend Warner (1989), Fanny Burney (2000) and Robert Louis Stevenson (2005) and the author of the best-selling Jane's Fame: How Jane Austen Conquered the World (2009). She writes regularly for the literary press on both sides of the Atlantic and was elected a Fellow of the Royal Society of Literature in 2006.

Her most recent work is Charlotte Bronte: A Life.
Posted by Richard Wilcocks at 1:29 pm 0 comments
Email ThisBlogThis!Share to TwitterShare to FacebookShare to Pinterest

Review by Lucasta Miller
http://ind.pn/1Q3lEy2
Posted by Richard Wilcocks at 1:14 pm 0 comments
Email ThisBlogThis!Share to TwitterShare to FacebookShare to Pinterest

A review by Kathryn Hughes
http://bit.ly/1SggWw1
Posted by Richard Wilcocks at 1:10 pm 0 comments
Email ThisBlogThis!Share to TwitterShare to FacebookShare to Pinterest 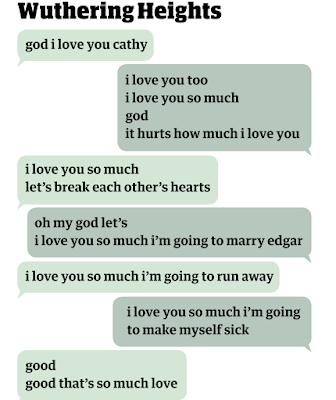