Thanks for supporting us 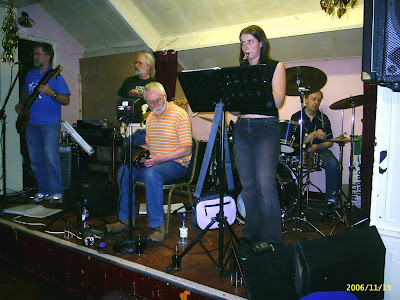 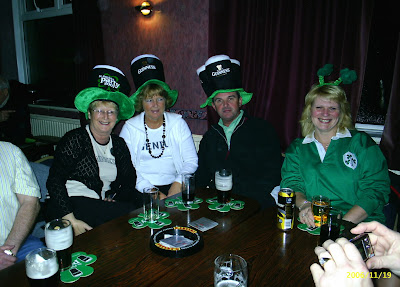 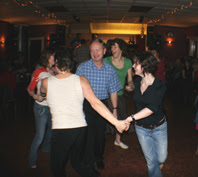 The Friends of the Bronte Parsonage would like to say a big thank you to everyone who supported the St.Patrick's night Ceilidh, their first fundraising event.

Over seventy-five people enjoyed a lively evening of great music from local band Northern Comfort, a tasty supper provided by the Friends and good company. Many local businesses donated prizes for the raffle for which we are very grateful.

The Ceilidh was a great success raising over five hundred pounds for Museum projects and is already being spoken of as becoming an annual event. If you missed it we look forward to seeing you there next year!


Pat Berry
Chairperson, The Friends of the Bronte Parsonage.
Posted by Richard Wilcocks at 9:20 pm 0 comments
Email ThisBlogThis!Share to TwitterShare to FacebookShare to Pinterest

What's in a name?

The last few days have been so hectic that I have not had a moment spare to sit down and put new material on the blog. The new material uppermost in my mind is the news release which I had sent to the local and the national media on Monday, which to my surprise brought more responses than my pessimistic mind had imagined.

It was timed to coincide with the posting of the individual (mail-merged) letters to the managing directors of a selection of companies which use the Brontë name. The response from the locals was immediate: soon I was talking to Clive White from the Keighley News (who did plenty of ringing around and googling for us), chatting on the Radio Leeds breakfast programme, answering emails and grabbing phones with not much space in between.

Today was similar, but I did reserve some special time for my son in London, because this morning I became a grandfather for the first time.

I have browsed through the write-ups so far, and I am generally pleased. I quite liked the Independent's article today in spite of the faces which went with it, but I am not sure what Mr Nevin is getting at. I shall look at a copy of the Keighley News soon.

To date, I have had one reply from a company and it was friendly. I shall make a personal visit in the near future. Readers of this blog will be updated. Meanwhile, here is the original media release:

What’s in a name?

The Chairman of the Brontë Society in Haworth is more than a little irritated by all those companies which use the name Brontë in their names.

“Very few of them have ever been in touch, and even less than that have given us anything by way of sponsorship or financial help,” he said.

“There are dozens of them in Britain alone, making or supplying a range of products, from stone to spring water and from outdoor clothing to cooked chicken. I decided to write to their managing directors”

Here is the letter:

I am writing to you for the simple reason that your company uses the name Brontë in its title. I am guessing that this was chosen because it confers a certain prestige upon you, associating you in the public’s imagination with the Brontë family and perhaps the Brontë Parsonage Museum as well. Bronte is both the name of a town in Sicily and the Greek word for thunder, and it was chosen by the Reverend Patrick Brontë (with the addition of the diaeresis) as a new version of his family name of Brunty early in the Nineteenth Century, mainly because of its associations with Lord Nelson, a national hero at the time.

I hope that «Company_Name» is currently prospering. I am wondering whether you have recently visited the Brontë Parsonage Museum in Haworth, which is run by the Brontë Society. If you have, you will know that the home of the Brontë family, the Georgian house where Charlotte, Emily and Anne Brontë wrote the books which made them world famous, is lovingly preserved by a dedicated staff in spite of a tight budget.

There is a programme of special events at the museum which runs throughout the year, which includes special exhibitions, talks, day-schools, courses, children’s holiday workshops, film, theatre and musical performances. Its education programme is ‘inspired’ according to the Judges’ Citation for winners of the prestigious Sandford Award.

The Brontë Society possesses one of the most important collections of Brontë items in the world, housed in the Parsonage, an invaluable resource for the many researchers seeking to shed further light on the Brontë writings, the Brontë family and the social, political and economic history of the Brontë times. Thus, there will always be a demand on the Society’s financial resources as newly-discovered and existing Brontëana come on to the market. There is also a considerable cost in the professional care, conservation, storage and management of the Society’s existing collection.

The Brontë Society gets no direct government assistance, so it is reliant on the generosity of its supporters and visitors to the museum. This is where you come in, because I believe that you could help. I am inviting you to make a donation to us, which would be gratefully received and publicly acknowledged.

Your company could sponsor an appropriate artefact, a special event, an exhibition, a children’s workshop…….the list is long. Or, you could contribute to our Acquisitions Fund, with a focus on a particular item. Your company’s name would feature in our publicity.

Please do not hesitate to get in touch with me by letter or email, or by ringing me directly on xxxxxxxxxxxxxxx I would be very happy to meet you personally to discuss how you could help us.

Chairman of the Brontë Society
Posted by Richard Wilcocks at 6:35 pm 1 comments
Email ThisBlogThis!Share to TwitterShare to FacebookShare to Pinterest

Wuthering Heights at the BFI 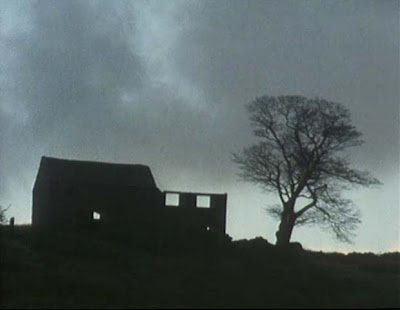 Simon McCallum writes:
I am a curator at the British Film Institute working on the Mediatheque, a resource in our new BFI Southbank venue where members of the public can access a range of material from the BFI National Archive.
I would like to let readers of the Brontë Parsonage Blog know that one of our opening collections, in a regular strand called The Book Group, is this month featuring Wuthering Heights. Users will be able to watch five TV and film adaptations of the novel and a range of documentary material on the Brontës. See below for the full listing of available titles - and I should stress that these will be available in their complete form, not just clips:
Wuthering Heights (BBC 1962) (starring Claire Bloom and Keith Michell)
Wuthering Heights (BBC 1967) (4-part dramatisation starring Ian MacShane)
Wuthering Heights (BBC 1978) (5-part dramatisation)
Wuthering Heights (ITV 1998)
Wuthering Heights (1970) (feature film starring Timothy Dalton)
The Brontës Lived Here (1973)
Emily Brontë at Haworth - A Personal Impression by Beryl Bainbridge (1973)
The Brontë Business (1977) with Joan Bakewell
The Brontë Connection (1979) - 'an investigation by Mary Butterfield'
Top of the Pops 78 (featuring music video for Kate Bush's Wuthering Heights)
The Mediatheque opened to the public today, and is open to everyone, free of charge. Some viewing stations can be booked in advance by telephone, or visitors can turn up on the day and book themselves in for a session.
Here are some useful links:
http://www.bfi.org.uk
http://www.bfi.org.uk/whatson/southbank
http://www.bfi.org.uk/mediatheque
A full Mediatheque website will be up and running soon but in the meantime there are some basic listings and information documents available.
This is a great resource for any Brontë fans or fans of the novel, and should be of interest to Brontë Society members and visitors to the Parsonage.

Posted by Richard Wilcocks at 1:28 pm 0 comments
Email ThisBlogThis!Share to TwitterShare to FacebookShare to Pinterest

Posted by Richard Wilcocks at 10:42 am 0 comments
Email ThisBlogThis!Share to TwitterShare to FacebookShare to Pinterest 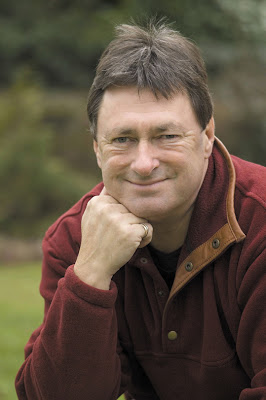 This year the Brontë Parsonage will be involved in UKTV History’s Britain’s Best campaign, which aims to find the nation’s favourite historical site.

Hosted by Alan Titchmarsh, the campaign will involve two television series and a final programme presenting the winner as decided by you and the British public.

As someone who values the Parsonage, please take the time to vote for it! You can do this from 5 April to 27 August in any of the following ways:

• visiting www.uktvhistory.co.uk and registering your vote

• or visiting us and posting your vote into our voting box.

• For those of you who have Sky, you can also vote using your Red Button.

UKTV History is also launching a Britain’s Best directory on www.uktvhistory.co.uk that will help you find some of the best historical locations to visit across the UK, as well as reviews, pictures and videos for each place from people who have actually been there.

Britain’s Best will be on UKTV History (Sky channel 537, Virgin TV 203 and Freeview 12) from 9 April to 20 May and from 23 July to 27 August. Don’t miss the final result on 17 September to see if we’ve won!
Posted by Richard Wilcocks at 8:05 pm 0 comments
Email ThisBlogThis!Share to TwitterShare to FacebookShare to Pinterest

Congratulations to Brontë Society members who have set up a brand-new website with a focus on the city of Brussels.

It looks superb, and can be found at www.thebrusselsbrontegroup.org/

In particular, check out the Secret Mission collection in the Picture Gallery for a record of the direct action taken in 2004 by Selina Busch and Elle Vaessen to put up an appropriate blue plaque in the rue Terarcken. This exploit was featured in Brontë Society Gazette at the time. The plaque is there to this day.......
Posted by Richard Wilcocks at 3:46 pm 0 comments
Email ThisBlogThis!Share to TwitterShare to FacebookShare to Pinterest

Polly (featured on this blog in October 2006) has moved to live by the banks of the River Derwent in Malton, North Yorkshire and is planning for consultancy and freelancing work.

Bill currently lectures in guitar construction on the Musical Instrument Technology course at Leeds College of Music and design and builds his guitars at his River Street workshops in Haworth. He is now concentrating on this. His website is at www.billdinsdale.com
Posted by Richard Wilcocks at 12:20 pm 0 comments
Email ThisBlogThis!Share to TwitterShare to FacebookShare to Pinterest
Newer Posts Older Posts Home
Subscribe to: Posts (Atom)