On Tuesday, 13 November Sally McDonald (Brontë Society Chair) and I met in Halifax to attend the committee meeting which would decide on the planning application to repower Ovenden Moor windfarm.

This repowering, unlike the proposal to erect a wind test mast on Thornton Moor, has not generated any concerted opposition.  There is no local group dedicated to stopping this development and although the group which opposes the Thornton Moor proposals was supportive, with individuals lodging objections with Calderdale Council, Ovenden is not their battleground.  Opposition from Calderdale residents was patchy and it was surprising that the local newspaper, the Halifax Courier, carried so few articles about the development.  At the committee meeting, therefore, Sally and I, as representatives of the Brontë Society, seemed to represent the largest single aspect of opposition – the impact on visual amenity – and as a result, Sally agreed to speak for all the objectors present, including the respresentative of Luddenden Civic Society.

After the Planning Officer had presented the application, Sally was allowed five minutes to speak for the objectors.  Although so little time was allowed, Sally put reiterated the objections of the Brontë Society, and stressed the High Court ruling of Mrs Justice Lang which said that energy requirements should not take priority over consideration for the landscape.  No questions were asked, and she was followed by the councillor for Illingworth and Mixenden who supported the application.  Emma Clark, the agent for Yorkshire Wind Power then spoke for the application.  Questions put to her by the panel of councillors allowed her more than the allotted five minutes to put her views.

Although the panel members were supposed to debate, this item on the agenda was nothing more than four of the panel expressing support for the application on the grounds – contrary to Mrs Justice Lang’s Hemsby ruling - that Calderdale’s need to meet its green targets was more important than what was considered to be a slight negative impact on the landscape.  Two councillors did not speak but at the vote, supported the application so that agreement was unanimous.

Naturally we are very disappointed with the outcome, but understand that the application may be called in by the government for review by the Planning Inspectorate.  If there is an opportunity to make a representation to the Secretary of State we shall do so.

Posted by Richard Wilcocks at 2:41 pm 1 comments
Email ThisBlogThis!Share to TwitterShare to FacebookShare to Pinterest

The Brontë Society wishes to express its disappointment with the decision by Calderdale Council to grant planning permission to Yorkshire Wind Power for the repowering of the windfarm at Ovenden Moor.
We feel that this decision demonstrates a lack of consideration for a unique heritage landscape which has internationally renowned cultural associations.  It shows, also, an insensitive disregard for the negative impact upon the environment and upon the local economy of Haworth and the area known as Brontë Country.
The Society has received a huge level of interest and support from all over the world.  We would like to take this opportunity to express our gratitude and to give an assurance of our continued commitment to Haworth’s cultural and historical significance.
Ends
13 November 2012
For further information please contact the Bronte Parsonage Museum on 01535 642323 / bronte@bronte.org.uk
Posted by Richard Wilcocks at 5:16 pm 0 comments
Email ThisBlogThis!Share to TwitterShare to FacebookShare to Pinterest

Discovering the Brontës in Brussels 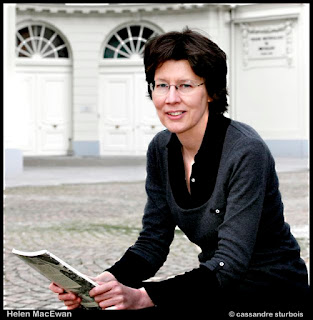 Helen MacEwan's book has finally been printed and the BS bookshop is now selling it. It’s advertised on the shop website under Miscellaneous books - click here to go to it.


A project I’ve been working on for some time, a book about the genesis and development of the Brussels Brontë Group (which started up in 2006) is finally completed; it has now been printed and copies are available. You can buy it in the English bookstores Waterstones and Sterling Books in Brussels, or from the Brontë Parsonage Museum shop. Click on the link above.

In the course of writing it I interviewed and spoke to many people in the group, and the book is about their discovery of the Brontës in Brussels as well as mine. So it’s something of a group project.

The book is called Down the Belliard Steps: Discovering the Brontës in Brussels

Charlotte and Emily Brontë’s stay in Brussels in 1842-43 to improve their French was to prove a momentous one for Charlotte in particular. She fell in love with her French teacher, Constantin Heger, and her experiences in the Belgian capital inspired two of her four novels, Villette and The Professor. Yet the Brontës’ Brussels episode remains the least-known of their lives.

When Helen MacEwan moved to Brussels in 2004 she discovered that not many people there seemed to know much about the Brontës’ time in the city. She herself had a lot to find out about their life in the Pensionnat Heger at the bottom of the Belliard steps. In the process of doing so she met other people who were similarly fascinated by the story, and with them formed the Brussels branch of the Brontë Society.

For all these people, following in Charlotte and Emily's tracks in modern-day Brussels, and setting up a literary group, was a voyage of discovery. In the course of telling their story, Helen finds some odd parallels between the Brussels of their day and ours, and reflects on why the Brontës' time there is so fascinating.

Jenna Holmes writes:
Andrea Arnold’s 2011 film adaptation of Wuthering Heights will be screened in Haworth on Friday 23 November, 7.30pm, at the West Lane Baptist Centre. The gritty film is a minimalist take on Emily Brontë’s novel which strips away the traditional conventions of a period drama. Featuring a cast of unknown actors, and depicting a mixed race Heathcliff for the first time on screen, the film’s cinematography by Robbie Ryan foregrounds the wild, brooding Yorkshire landscape and the soundtrack is taken purely from nature. With a limited cinema release last year, this is another chance to see the film on the big screen if you missed it the first time around!

The screening is a collaboration between the Parsonage and Haworth Cinema. The film has been programmed to coincide with the landscape exhibition Ways to the Stone House, currently on display at the Parsonage. Haworth Cinema successfully turns Haworth’s Baptist church into a cinema twice every month to show a programme of new releases.

The novel has been adapted for film and television many times, including the 1939 Hollywood version starring Laurence Olivier and Merle Oberon, and the 1997 version when Ralph Fiennes and Juliette Binoche took on the title roles. Andrea Arnold took a very different approach to the book, filming in North Yorkshire using hand held cameras, and casting mainly non-professional actors, including unknown Leeds actor James Howson who took the lead role of Heathcliff, and was the first black actor to play the part on screen.

Tickets are £3 on the door; no need to book in advance.  Certificate 15.