A news release from Sarah Laycock, Collections and Library Officer:
The Parsonage's collection is now accessible online. The catalogue includes images and information on over 7000 items. The catalogue, made possible by a Heritage Lottery Fund grant and a generous donation from a member of the Brontë Society, is a landmark achievement in the history of the museum, allowing global access to its remarkable collection.

Every January, the museum is closed for cleaning and conservation work, with object displays changed and different Brontë treasures introduced to ensure that items displayed through the previous year are protected and preserved and that there are new Brontë treasures for visitors to admire and appreciate. The museum is only able to display around 10% of its collection and it would be impossible for the whole of that collection to be exhibited at once. The new online catalogue will give visitors a chance to browse through the collection at their leisure and will give an indication as to its size and diversity.

The museum has recently undergone a major refurbishment allowing us to display more of our collections and improving the way objects are presented; making the museum much more interesting for visitors. The new on-line catalogue is also about making more of the treasures of our collections available for people to see, but in this case they can do so from anywhere in the world. So anyone with a passion for the Brontës’ shoes, china, jewellery or furniture, or wanting to read their letters, or just curious about them, can search the catalogue to learn more about them and see what’s kept in the museum’s stores as well as on public display

In conjunction with the museum catalogue, there is also an extensive research library catalogue listing thousands of entries including critical works, biographies, articles, film and drama archive material, journals and much much more. Simple and more advanced search options allow users to be as general or as precise as they need to be and for those who are planning a visit to the museum’s library, the online catalogue will enable them to plan what material they might like to see prior to a visit.

Posted by Richard Wilcocks at 2:14 pm 0 comments
Email ThisBlogThis!Share to TwitterShare to FacebookShare to Pinterest

A news release from Jenna Holmes: 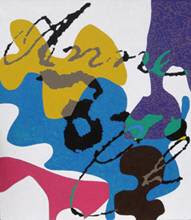 An exhibition of abstract paintings by Haworth based artist Victor Buta has opened at the Parsonage. The exhibition, Alter Ego, is based on the Brontës' signatures and pseudonyms and has been inspired by numerous items of Brontë handwriting and correspondence in the museum collections, including the Brontës’ pseudonyms of Currer, Ellis and Acton Bell, their famous ‘little books’ and the origins and development of the Brontë surname.

The exhibition takes place as part of the Museum’s contemporary arts programme and Victor Buta has also used the signatures of Cornelia Parker and Paula Rego within his work – two contemporary artists who have previously responded to the Brontës as part of the programme at the museum. Alter Ego is on show until 31 March and all of the paintings on display are also for sale.

As part of the exhibition, there are two special events taking place at the museum. On Saturday 28 February, Victor Buta will be holding a practical workshop for artists of all abilities to create their own paintings inspired by his exhibition and the Brontës’ handwriting. The day will include a trip to the Parsonage library to see examples of original Brontë correspondence. The workshop costs £25.00 (£15.00 concessions) and includes entry to the museum, materials and refreshments.

Spaces are limited but a few places remain available. For further information contact jenna.holmes@bronte.org.uk / 01535 640188. The museum has also commissioned leading graphologist Diane Simpson to analyse some of the Brontës’ handwriting as part of the project. Diane will be resident at the museum on Saturday 14 March, working with visitors to explore her findings. This event will be free on admission to the museum.

Victor Buta is a Haworth based artist who has developed a number of projects and exhibitions based on signatures, including a series of paintings using doctors’ signatures, now in the permanent collection of the NHS Hospital Teaching Trust. He has been exhibiting in solo and group shows for twenty-five years, teaches art to a variety of groups and has been involved in numerous large-scale community art projects.
Posted by Richard Wilcocks at 10:23 am 0 comments
Email ThisBlogThis!Share to TwitterShare to FacebookShare to Pinterest

Everything has been refreshed, thanks to the hard work of the Parsonage staff during the closed period. In general, more is on display, and costumes from the ITV version of Wuthering Heights (expect it on UK screens this year, ‘possibly in the early summer’) have been placed in the spruced-up rooms, so visitors will be able to see what Tom Hardy and Charlotte Riley wore for the filming when they walk around with the television images in their recent memories. The costumes all look freshly-stitched and ..….pristine. I suppose it would be too much to expect a line of dried moorland mud on Cathy’s hem.

The Genius exhibition is very impressive, a great improvement on what was there before, and the newly-uncovered window makes a significant difference. There are brief quotes on the walls, displays at appropriate eye-levels, intelligent selection and labelling, increased colour and a sense of airiness. There is also a section for younger children, who are invited to lift little blue lids to see illustrations of what it was like in the mid-nineteenth century. In an ideal world in which large sums of money can be brought by obedient genies, in some kind of separate visitors’ centre, there would be an abundance of stimulatory material for primary school visitors – toy soldiers and more....

Something like ten years ago, there was much talk on Brontë Society Council about a new visitors’ centre – should it be an earth-sheltered, ecologically-sound structure, or a kind of converted barn, and so on, and at one stage plans were drawn and a booklet produced. I remember contributing a piece. It was all fantasy, though, a series of optimistic speculations based on the supposition that a huge grant would be given.

Bonnie Greer (pictured below) was the guest at the official opening on Friday evening. She said all the right things, wonderfully, after an introduction from Director Andrew McCarthy. She was genuinely overwhelmed by simply standing inside the Parsonage, the place where so much of global literary significance had happened. She mentioned the influence of Patrick, the loving and unusually liberal paterfamilias who had allowed his daughters to read and write so much, and the continuing power of the Sisters: “I read Wuthering Heights at a young age, and if Emily Brontë can have such an effect on a little black girl in Chicago, she can have a big effect on anyone.” 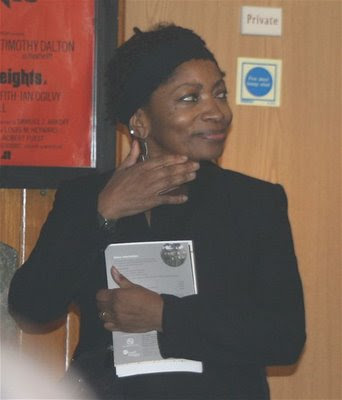 Posted by Richard Wilcocks at 12:40 pm 0 comments
Email ThisBlogThis!Share to TwitterShare to FacebookShare to Pinterest

Half Term Activities at the Parsonage

An exhibition of costumes from the upcoming ITV adaptation of Wuthering Heights, a newly refurbished exhibition focusing on the Brontës’ lives with interactive displays for families, and arts and crafts drop-in workshops are just some of the activities for visitors to the Parsonage  during half term week.

Bafta-winning costume designer Amy Roberts has worked with the museum to display several of the costumes that she designed for ITV’s new adaptation of Wuthering Heights. The drama, which will be broadcast later in 2009, stars Tom Hardy, Sarah Lancashire and Charlotte Riley and was filmed in Yorkshire last year. Visitors will be able to see items worn by Heathcliff, Cathy and Isabella, amongst others, on display in the period rooms of the museum and find out more about how the costumes were created.

The newly renovated major exhibition room in the Parsonage now showcases more of the museum’s collection of precious manuscripts and artefacts than ever before, and its interactive design and bold new graphics also offer fun ways for children to explore the Brontë story.

On Tuesday 17, Wednesday 18, and Thursday 19 February Education Officer Susan Newby will be running drop-in arts and crafts activities for families throughout the day, free on admission to the museum. Visitors to Haworth should look out for special entry coupons that can be found in the cafes and shops in Haworth during half term week, offering special entry prices to the museum from Saturday 14 to Sunday 22 February.

Also currently on display at the museum is a new contemporary arts exhibition by Haworth-based artist Victor Buta. His series of abstract paintings, Alter Ego, is based on the Brontës’ handwriting and signatures and the exhibition also offers new ways to discover the Brontës’ letters and handwriting. Victor Buta will be running an artists' workshop on Saturday 28 February for beginner or experienced artists to create their own Alter Ego paintings. For further information contact Arts Officer Jenna Holmes on 01535 640188.
Posted by Richard Wilcocks at 4:22 pm 0 comments
Email ThisBlogThis!Share to TwitterShare to FacebookShare to Pinterest
Newer Posts Older Posts Home
Subscribe to: Posts (Atom)