I thought it would be interesting for your bloggers to read something about the Cornelia Parker talk at the National Portrait Gallery:

There was a turnout of over 100 art-lovers for Cornelia Parker's talk at the National Portrait Gallery on 26 April. Her presentation was specifically about Brontëan Abstracts, the exhibition produced for the Parsonage last autumn. The curator of talks introduced Andrew McCarthy who gave a spirited introduction to the Parsonage and the Contemporary Arts Programme that Cornelia's project kicked off.

Following an illustrated presentation by the artist herself, she was joined by writer Deborah Levy for a conversation about the inspiration behind the work and the methods she used to pursue different aspects of Brontë mythology.

Cornelia was especially eloquent about her unfulfilled ambition to implant strands of the Brontë Sisters' hair into Nelson's (the Duke of Brontë's) hair on Nelson's Column in Trafalgar Square. She felt this was an art intervention whose time has perhaps not yet come. (See this blog's archive to find Cornelia's full account of this)

I was struck overall by how much work she put in to Brontëan Abstracts - not just the electron microscope investigations, but the close-up photographs of the Jane Eyre manuscript, the Plymouth interview with Phyllis Cheney which I filmed for her, and the psychics' visit to the Parsonage. There were other enquiries too that were not followed up for the exhibition, such as the forensic tests offered by West Yorkshire Police on items of Brontë linen.

It was obvious from the talk that Cornelia Parker sets great store by her Brontë work, and will ensure that it is shown more widely. This can do nothing but good for the reputation and attraction of the Parsonage Museum. The project also shows the wealth of possibilities open to other artists as the Contemporary Arts Programme moves forward.

Simon Warner
Posted by Richard Wilcocks at 9:44 am 0 comments
Email ThisBlogThis!Share to TwitterShare to FacebookShare to Pinterest

You can go to the special weblog set up for the Collecting Place project at www.thecollectingplace.blogspot.com to see progress reports, pictures and comments. You can even offer your own contributions by emailing photos@simonwarner.co.uk

Here are some further images anyway.... 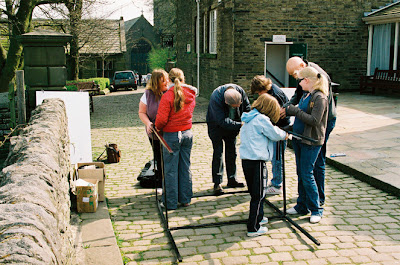 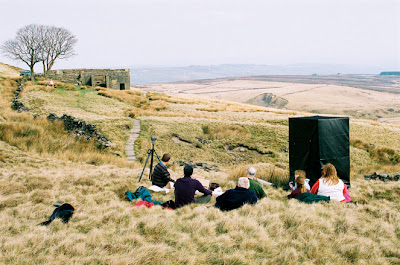 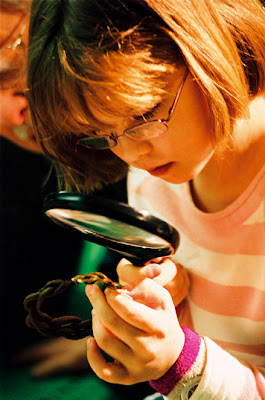 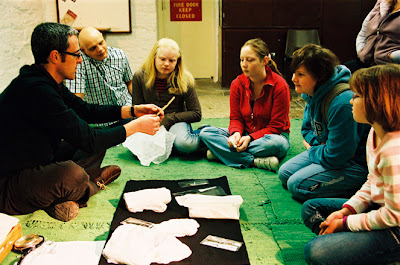 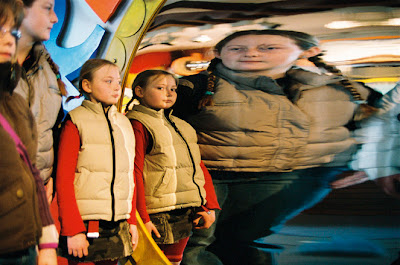 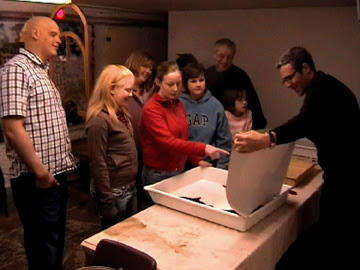 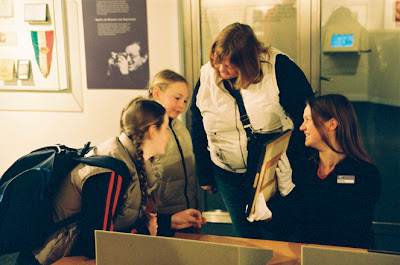 Posted by Richard Wilcocks at 9:01 pm 0 comments
Email ThisBlogThis!Share to TwitterShare to FacebookShare to Pinterest 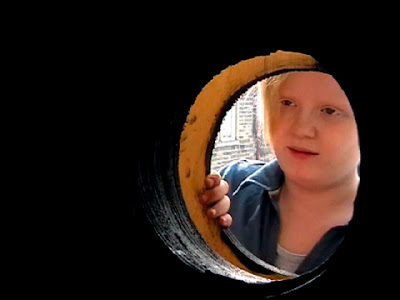 "The Brontës," says the Parsonage's Deputy Director Andrew McCarthy in the foreword to the handsome Brontë Society publication which accompanies The Collecting Place, "were all intensely interested in the visual arts. As children, their imaginations were shaped not only by the written word but also by visual images."

He goes on to mention Edward and William Finden's engravings from Byron's works, the miniature woodcuts of Thomas Bewick and the apocalyptic landscapes of John Martin, all of which influenced the Brontës and helped shape the people and places that feature in their early writings.

Simon Warner, the lens-based artist (he doesn't really mind being called a photographer) whose pictures can be found in so many illustrated books and calendars with a Brontë or a Yorkshire connection, undermines all clichés..... and there are plenty when it comes to the Brontës and Yorkshire. Somehow, most of his images have a subtle freshness about them.

In The Collecting Place, described as 'Literary Landscape through a Camera Obscura', the results of a photographic collaboration between himself and sight-impaired young people from Bradford which is at the Parsonage until 11 June, he gets near to the old magic of photographic image-making, the sort of magic which some long-lost tribe might believe in when it sees images of its own people for the first time and believes their souls to have been captured.

The project lasted for a highly creative six days over Easter. "I think we all felt a sense not just of belonging but of contributing to this wild cultural landscape, adding another chapter to its rich visual and literary history," writes Simon Warner before presenting a full history of the camera obscura (Chinese philosopher Mo-Ti mentioned it in 500BC) and an explanation of the workings which would sound impressive issuing from the mouth of a Physics lecturer.

Simon Warner is represented in Alchemy (2006 - 7), an Arts Council England touring show in which twelve contemporary artists explore the essence of photography. His contribution Lavater - The Shadow of History takes the form of a performed magic lantern lecture with photo-chemical demonstrations.

Creative connections between past and present are at the heart of the Brontë Society's contemporary arts programme. "We aim to undermine familiarity with the Brontës and stimulate new thinking about this remarkable creative family," comments Andrew McCarthy.

This collaboration is undoubtedly remarkable and might be unique. I would like to hear of anything similar. If you can make it to Haworth in the next week or so, get to see it, because you will be impressed.

This Friday, a couple of hundred members of the Brontë Society, mainly from the UK but with delegations from overseas, will be in Haworth for an annual series of events which will last until Sunday evening, with excursions on he Monday and the Tuesday of next week.

On Friday evening, a Jazz trio will play in the Parsonage Meadow and an auction of Brontë-related books will be held by Andrew McLauchlan.

On Saturday, the Annual lecture at 11am will be given by Professor Douglas Gifford from Edinburgh, who in addition to his university work is Honorary Librarian of Walter Scott’s Library at Abbotsford and Director of the Abbotsford Library Research Project Trust. The AGM (chaired by Society President Rebecca Fraser) will be at 4.30pm, then at 7.30pm there will be a panel discussion featuring the Brontë biographers Juliet Barker, Edward Chitham, Rebecca Fraser and Lyndall Gordon, chaired by journalist and author Justine Picardie.

Sunday begins with Coffee and Cadence, with readings by Robert Barnard, Angela Crow and Richard Wilcocks, followed by walks in the afternoon. In the evening there will be a showing of the film Cold Comfort Farm.
Posted by Richard Wilcocks at 8:34 am 2 comments
Email ThisBlogThis!Share to TwitterShare to FacebookShare to Pinterest

Over the past few years, car clampers have made quite a reputation for themselves in Haworth.


I have appeared on BBC Look North in the past (three years ago) deploring the situation, and have added my voice to many others more recently:


The activities of Carstoppers have little to do with parking control and everything to do with making an excessive profit from tourists to Haworth. The company's activities, especially its aggressive working methods, have been very damaging for both local traders and for the Brontë Parsonage Museum: quite clearly some tourists are staying away because they do not want their cars clamped for trivial or ridiculous reasons.

I would like to appeal to all those viewers who have said they will stay away from Haworth to reconsider their decision. It is possible to avoid car parks owned by Ted Evans. Please try parking in the Brontë Parsonage car park, which is owned by Bradford - or perhaps walk up from the railway station. The Brontë Parsonage Museum is at the heart of a wonderful village and is well worth visiting in spite of the antics of Carstoppers.


It is a criminal offence to clamp/block/tow away a vehicle on private land without lawful authority. Lawful authority to immobilise or move a vehicle is restricted to a number of organisation such as the police, DVLA and local authorities.

Privately owned land includes car parks, such as those at retail parks, whether or not there a fee is payable in order to park there (not local authority run car parks).


To commit this offence a person must intend to prevent the owner/driver from moving their vehicle. Therefore, clamping your own car to prevent theft would not be an offence. No offence would be committed where a driver was prevented from leaving a car park because the vehicle's exit was blocked by a fixed barrier.

Posted by Richard Wilcocks at 6:48 pm 108 comments
Email ThisBlogThis!Share to TwitterShare to FacebookShare to Pinterest

Engaged at the Parsonage 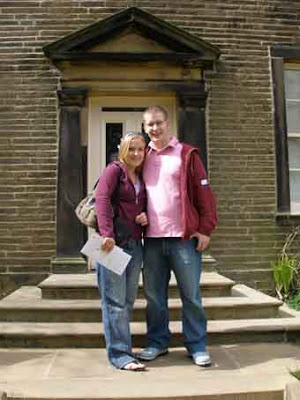 This is from a recent press release by Diane Kay:

Staff at the Parsonage have seen a rush of engagements recently with earnest chaps going down on one knee at the door to the world famous home of the Brontë family in Haworth to ask for their girl's hand in marriage.

The family home of the Brontës has been a magnet for enthusiasts for many years with visitors enjoying a taste of what life was like in the 1800s for Charlotte, Emily and Anne. The romance created in their books draws courting couples from across the globe wishing to create their own piece of Brontë magic.

One such couple from Oxfordshire chose the Parsonage as the perfect setting for this important romantic gesture. Ben Heather proposed to his girlfriend of three years on the Parsonage steps and thankfully got a positive response!

Holly Simpson said yes on the couple’s third anniversary. Ben chose the Brontë home because of Holly’s interest in their novels through her studies in English, Media and Creative writing at the University of High Wycombe in Buckinghamshire. One of her favourites is Wuthering Heights.

Ben said, “Holly knew nothing at all about it so was very surprised. She started to cry the minute I pulled out the ring. We would like to thank everyone at the Parsonage for their hospitality and kindness, and for the wonderful gift we received on the day.

"I'm very sure we will be back in the future, as the museum will hold a special place in our hearts and memories. No date has been set for the big day as we both still live with our parents and are desperately saving up for a house first, then we will save up and sort out the big day, hopefully in a couple of years.”

Holly is currently finishing her final year at University and writing her dissertation which is on women's writing before, during and after women's emancipation and women's battle to get published. The Brontës were an inspiration.
Posted by Richard Wilcocks at 4:00 pm 0 comments
Email ThisBlogThis!Share to TwitterShare to FacebookShare to Pinterest

Brontë Society member Ian Emberson has told this blog that there is a new CD out which includes John Joubert's song-cycle Six Poems by Emily Brontë. The performers are : Lesley-Jane Rogers ( soprano ) and John McCabe ( piano ).

John Joubert is pictured below 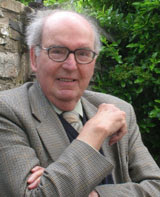 Posted by Richard Wilcocks at 10:02 am 0 comments
Email ThisBlogThis!Share to TwitterShare to FacebookShare to Pinterest

Barbara Whitehead, owner of the Brontë Birthplace in Thornton, wants it to be known that it is to be auctioned by Eddisons on 21 June. The website is at www.eddisons.com

The auction will be held on 21 June 2007 in the Banqueting Suite of the Leeds United Football Club at Elland Road in Leeds. I am told that the catalogue is still being prepared. If you want one, phone Eddisons at the Leeds office with your details: +44 113 243 0101 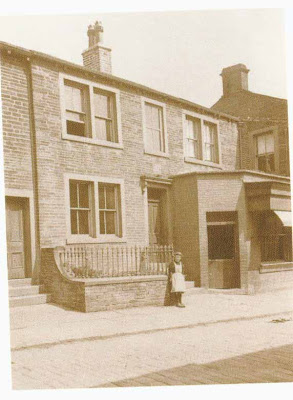