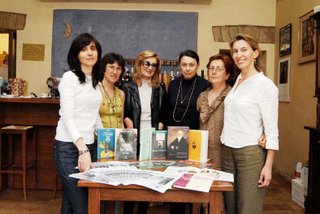 Prof. Franca Gollini Tiezzi reports on a recent meeting of the Italian Section:


On 27th May 2006 we met in Vignola at the Osteria della Luna, an old and historic inn in the very centre of the town, not far from the medieval castle.


The meeting was to celebrate the reprinting of the Italian
translation of The Life of Charlotte Brontë by Elizabeth Gaskell.


After introducing the famous book, Prof. Franca Musi read some of the most significant letters which Patrick Brontë wrote to Mrs Gaskell asking her to write the memoir of his dear daughter Charlotte immediately after her death. The letters were taken from The Letters of the Reverend Patrick Brontë edited by Dudley Green. They give us a new picture of the Brontës' father who is seen for the first time not only as an eccentric but also as a learned, sensitive, caring man.


The talk aroused great interest and enthusiasm and was followed by a lot of questions about Patrick and the Brontës.


The meeting ended with a nice party with delicious cakes and the famous Vignola cherries. 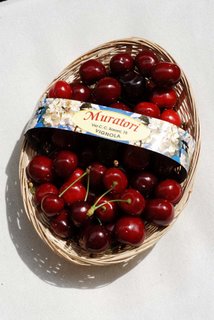 Posted by Richard Wilcocks at 1:46 pm 0 comments
Email ThisBlogThis!Share to TwitterShare to FacebookShare to Pinterest

Thanks for voting for us

Viewers of BBC2â€™s Peopleâ€™s Museum programme voted in their hundreds on 30 May to ensure that an early â€˜little bookâ€™ written by Charlotte BrontÃ« would be included in an on-line Peopleâ€™s Museum.

Although the Enigma Machine, which was invented by the Germans in 1918 solely to encipher and decipher messages, was the overall winner on the day, the little book' came a close second with 958 votes - one of the highest scores awarded to a single object throughout the programme.

A source at Reef TV who produced the programme said â€œCharlotteâ€™s little book generated hundreds of viewers' votes, much more than some of the other objects up for election. The Enigma Machine received 1,631 votes on the day so Charlotteâ€™s book was unfortunately pipped at the post for the top placeâ€�.

The Peopleâ€™s Museum programme has invited viewers to vote on their favourite museum artefact from across the UK. The object with the most votes will be proclaimed the overall winner on 9 June 2006. Items which have been voted for by the public will be placed in a virtual Peopleâ€™s Museum hosted on the BBCâ€™s history website

TV Presenter Jules Hudson, who is an historian, an archaeologist and the presenter of Channel 4â€™s Time Team and the BBCâ€™s Horizon programmes described the book as â€œan incredibly small but important relic that so innocently maps out the beginnings of an extraordinarily talented womanâ€™s life".

Polly Salter, Curator at the BrontÃ« Parsonage Museum added, â€œWe are delighted that Charlotteâ€™s book received so many votes. The little book is rarely out on display at the museum due to its delicate nature, but with increased interest from visitors we have agreed to exhibit the book for the rest of the year for all to seeâ€�.

This post is from Diane Benn
Posted by Richard Wilcocks at 11:28 pm 0 comments
Email ThisBlogThis!Share to TwitterShare to FacebookShare to Pinterest
Newer Posts Older Posts Home
Subscribe to: Posts (Atom)