Sally McDonald writes:
Mrs Dyddgu Pritchard Owens passed away on 12 August.
Dyddgu was a truly popular and well known figure in the Society who was at every AGM weekend I can remember until this year, and her absence this year was noticeable. She won friends with her cheery nature and passion for the Brontes and Haworth.  The Society offers deepest sympathies to Dyddgu's family.
Posted by Richard Wilcocks at 12:46 pm 0 comments
Email ThisBlogThis!Share to TwitterShare to FacebookShare to Pinterest 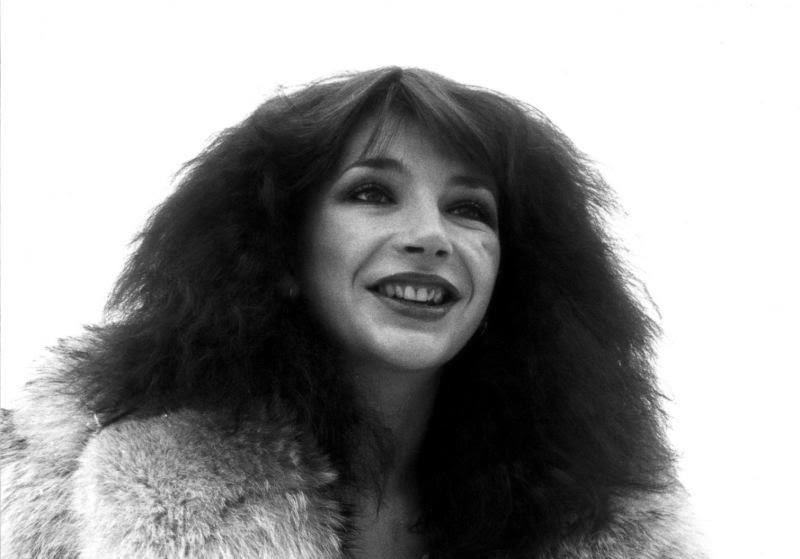 Kate Bush, a terrific singer and performer, brought a significant number of new members to the Brontë Society after the release of her 1978 single Wuthering Heights, and turned many others towards actually reading the novel. She is still popular with many aficionados, even though not an enormous amount seems to have happened for an incredible thirty-five years.

Now she has come back to live performance - in Hammersmith and then in Manchester. It is one of the big musical events this year. We'd love to have your review, so send it to the blog at heveliusx1@yahoo.co.uk

I went to the opening night on Tuesday 26 August. The atmosphere of anticipation beforehand, waiting outside with the crowd to get in the concert hall, was really magical. You could feel the excitement everywhere!

I loved the first part of the concert, which was a series of songs followed by a theatrical performance of The Ninth Wave: Kate gave a spectacular show, she had a very strong voice and the whole story was fascinating to watch.

The second part after the break was less interesting, still spectacular in a way but also very confusing. Less strong than the Ninth Wave performance. The anticipation and expectations in the concert hall grew with the encore, and although she performed two beautiful songs, you could feel that the audience was waiting for Wuthering Heights, which did not come. The audience was applauding for more, but Kate did not return to oblige. That was a little bit of a disappointment, but I was glad to have been there and seen it all.

It was certainly a magical evening. Something to treasure always.

Benjamin Lovegrove writes:
I was there last night (Saturday 6 September). Like many people, I wanted to hear Wuthering Heights but Kate does Cloudbusting for the finale which is a worthy alternative. For me the highlight was Kate's son Bertie singing the male vocal in An Architect's Dream. Before this we heard classic songs like Running Up That Hill and Hounds of Love.

The song cycle Ninth Wave was dark and intense, contrasting well with the summery themes of the songs from Aerial. This included some of Kate's more experimental work featuring birdsong.

It was a very emotional experience as well as a rare chance to see her play live and I recommend anyone who is able to should go and see her.
Posted by Richard Wilcocks at 11:29 am 0 comments
Email ThisBlogThis!Share to TwitterShare to FacebookShare to Pinterest

From one Haworth to another... 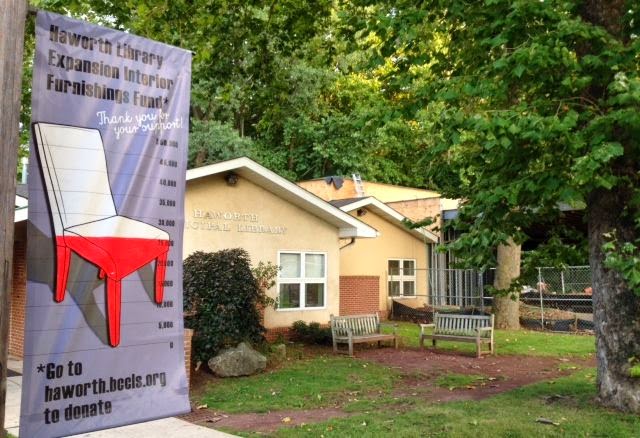 I'm president of the Friends of the Library in Haworth, New Jersey, USA.  Our library here is trying to reach out to Brontë fans everywhere to get some help for its expanding library.   I figure anyone who's read and appreciated Jane Eyre or Villette or Wuthering Heights or Agnes Grey must have a soft spot for a place named Haworth.   Haworth, New Jersey, is, in fact, named for Haworth, England - in 1872 a railroadman and land developer named John S. Sauzade named this little station stop Haworth in honor of the Brontë sisters' hometown.  Sauzade was himself a novelist, and, obviously, a huge admirer of the Brontës.
Within our new local history room, we hope to have a plaque on the wall, honoring the sisters - and the British town - that gave us such a special name.   We're also going to have a new children's room and a meeting room.
The new addition will have a glass 'Donor Wall' with names honoring the people and groups that have donated to our expansion, and it occurred to me that it would be meaningful to have the Brontë Society listed as a donor, because without the Brontës, we wouldn't be a Haworth.   And a library in a town called Haworth is a very relevant place to remember the Brontë sisters.
If you'd care to help, there's a Paypal "Donate" button on the library website, http://haworth.bccls.org/  We sure would appreciate your support.   Small donations from lots of people add up to a large donation!  And come visit us sometime...  a lot of folks from here have visited your Haworth and had a grand time.

Posted by Richard Wilcocks at 6:10 pm 0 comments
Email ThisBlogThis!Share to TwitterShare to FacebookShare to Pinterest

One of the historic films shown regularly on television is Goodbye, Mr Chips, which was on larger screens in picture houses in 1939. We'll be seeing it again soon, because of its main theme, which deals with the deaths of young men in the First World War. The main stars were Robert Donat and Greer Garson. One of the lesser-known principals was Milton Rosmer, who played a character called Chatteris. Look out for him next time the film comes round, because back in the 1920s he played Heathcliff in a lost, silent, version of Wuthering Heights, which was made by the Ideal Film Company in and around Haworth, directed by Arthur Bramble. Only a few stills remain as visual evidence of this first adaptation of Emily Brontë's novel.

The film might have gone the same way as many others: made of nitrate stock, it may well have exploded, or turned to dust in a forgotten canister. The script, however, has been found, and has been bought by the Parsonage from a West Sussex book dealer, along with nearly two dozen pages of production notes. It will go on display early in 2015.

In 2006, the lost film was front page news in the Brontë Society Gazette: 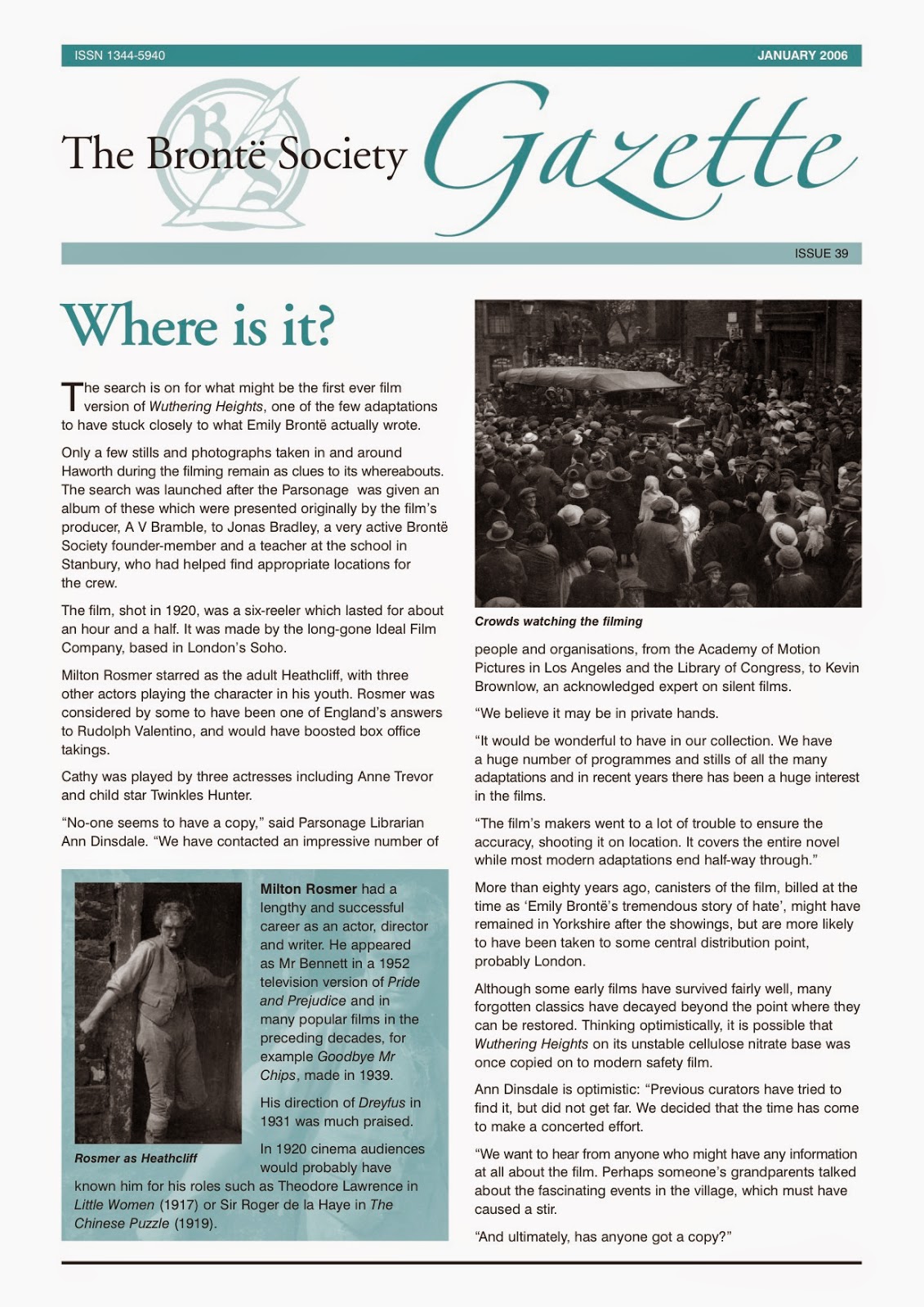