Angela Crow-Woods, who died on 24 February at the age of 86, was until recent years a seemingly tireless member of the Brontë Society who organised events, performed, contributed articles and was known as an expert on Maria Branwell, the mother of the Brontës. Her book on the subject, Miss Branwell’s Companion was published in 2007 and was translated into Italian in the same year.

Her professional name was simply Angela Crow. Her career on stage began when she played truant from school to play the part of Jane Eyre in a touring production, and when she was still a student at RADA, she won the Gilbert award for comedy, the Tree award for Drama and the Emile Littler award for Outstanding Talent. She was the lead in many theatre productions, and played Lily Smalls (the maid of the Beynons) in an early stage production of Dylan Thomas’s Under Milk Wood at the New Theatre in London and later at the open air theatre in Regent's Park for the Robert Atkins Company. High-profile television work which lasted for sixty years or so followed. This included Hancock’s Half Hour, Last of the Summer Wine, Grange Hill, Heartbeat and The Royal. She was Doreen Lostock in the early sixties in Coronation Street.

She often contributed as an organiser and a performer at the Brontë Society’s traditional June weekends, often described as ‘AGM weekends’. These were attended by delegates from all over the world. To give examples, in June, 2007, Angela organised and compered a popular session of readings from the Brontës. This was mentioned in the blog report from Brussels delegate Selina Busch:

In the same year, Angela was in Milan to meet Italian friends and to launch her book. Franca Gollini Tiezzi wrote about it here: 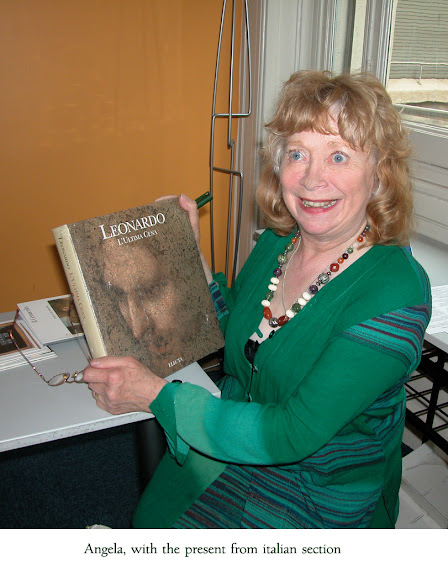 https://bronteparsonage.blogspot.com/2007/06/bront-event-in-milan.html
As part of the 2008 June weekend, Angela organised a day of events in Thornton (where she lived) which included readings from Charlotte Brontë’s letters by herself and Professor Robert Barnard:

In 2011, the Brontë Society organised an excursion to Lothersdale, primarily to take a look at the outside of Stonegappe, the mansion which once belonged to the Sidgwick family, where Charlotte Brontë was an unhappy governess in the summer of 1839. The main part of the excursion was in the church at Kildwick, where I joined Angela in a dramatic ‘recollection’ of the events of that year. Chris Went contributed this account:

In September 2014, Angela was responsible for another event in Thornton, this time centred on Emily’s Café, which is in the Brontë birthplace. Poet Simon Zonenblick showed a preview of his video about Branwell Brontë:

And Charlotte Brontë’s birthday was celebrated at the 2016 Mirfield Arts Festival thanks to Angela:

These are just a few of many examples which show the energy of a member who was a personal friend to many, and an inspiration for the entire membership.