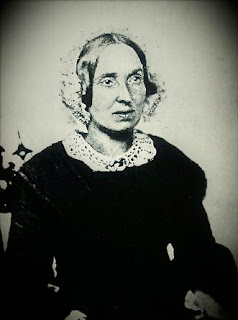 Thanks to a fundraising campaign by the charity connected to Bradford's famous Undercliffe Cemetery, a headstone was unveiled yesterday to Nancy Garrs (or Nancy De Garrs) over the pauper's grave where she was buried. She was one of the servants who were in the company of the Brontë children, and was at the Thornton Parsonage  soon after the birth of Charlotte which has led to her description as 'Charlotte's nurse'. She was twelve, possibly thirteen when she began her service in July 1816. A couple of years later, Patrick Branwell and Emily Jane arrived, and Nancy's younger sister Sarah joined her in service. They stayed until 1824.

Her grandfather was French, and she was the daughter of a local cordwainer, Richard Degarrs, who was known as Dicky Garrs. Perhaps the 'de' was dropped because at the time Napoleon was the bogeyman in the British Isles. She married Pat Wainwright, who died, then John Malone, who worked in a Bradford wool warehouse. When he died, she ended up in the Bradford Workhouse, but it was not an unpleasant experience for her because she received preferential treatment, with her own room and relatively good food, because by this time the Brontës were famous, and the mythmaking had begun, not only because of the novels but because The Life of Charlotte Brontë by Elizabeth Gaskell, had been published in 1857. Visitors to Haworth and its environs sought out people like Nancy, who appears in Gaskell's part-fact, part-fiction biography as 'wasteful'. Nancy was so upset that she asked Patrick Brontë to put the record straight in a kind of testimonial letter which she had framed to hang on the wall. It reads:

Haworth, August, 1857. I leave to state to all whom it may concern that Nancy and Sarah Garrs, during the time they were in service, were kind to my children, honest, and not wasteful, but sufficiently careful in regard to food and all other things entrusted to their care. P. Brontë, A.B., Incumbent of Haworth

Until now, her grave has been unmarked. Now it is suitably marked in stone, and can be visited.

Posted by Richard Wilcocks at 3:01 pm
Email ThisBlogThis!Share to TwitterShare to FacebookShare to Pinterest