A Walk to Oxenhope and Marshlands 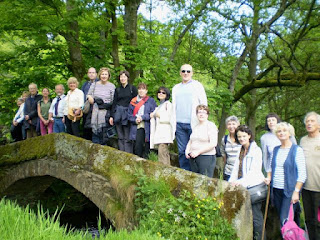 Three weeks ago, sunshine and blue skies (!!!) greeted Brontë Society members for the AGM weekend Sunday walk  to Oxenhope.  I have walked the route many times, and it has the happiest connections to the courtship and wedding of Charlotte Brontë and Arthur Bell Nicholls.  We walked up a narrow walled path to Sowdens, the home for twenty years of  the Rev W Grimshaw, and saw the  ancient barn used by John and Charles Wesley to preach.  We had to search for the commemorative plaque, which was covered in rambling roses.

Our group followed the path across the medieval  field systems, to Old Oxenhope Farm,  the route Rev Joseph Grant and Arthur Bell Nicholls walked on his June wedding morning.  There was much discussion and conjecture about their arriving at church with boots and cassocks  covered in wet mud.
The long views across the valley are quite spectacular on a sunny day,  and compensate for the nettles and boggy ground.
We paused to look at Marshlands, the home of Rev Grant, and its neighbour, the Old Grammar School, attended  briefly by Branwell  Brontë to study Greek. The buildings are substantially the same as they were one hundred and fifty years ago.

A steep field led down from Bent’s house,  to the Oxenhope railway line - the  whole area was used in the iconic film The Railway Children.   Our group followed the valley path to the medieval pack horse bridge, pausing to watch two trains on the Worth Valley line. Then it was back to Haworth.

The AGM weekend entertained many more new visitors from Brussels, and we all had the opportunity to talk to them on the walk, and hope to see them  again next year.


A Walk with Ian Dewhirst 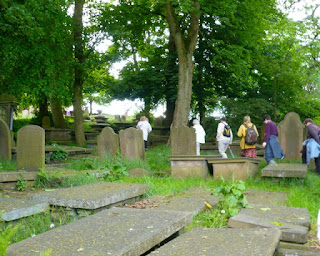 It was with the anticipation of a very interesting afternoon that members met with local historian and retired librarian Ian Dewhirst for a ‘walking/talking’ tour of the local graveyards. With his inimitable style Ian took the group to various graves in the old churchyard where they were regaled with fascinating stories. One memorial stone showed that Elizabeth Hartley had hoped to escape the harsh realities of life in nineteenth century Haworth for a new life in Australia - only to perish with two hundred and seventy other souls on the ship ‘London’. Isaac Constantin emigrated to Canada and became an ordained minister but not before he had established himself as a local poet in Haworth – one of his published poems stretched to one hundred and ninety seven pages!

The Haworth of the past was not exempt from scandal and intrigue for Ian related - round their grave - the story of the Sagar family. Mr Sagar was master of the local workhouse and his wife, who was said to procure girls to visit the couple’s bedroom, was his assistant. Mr Sagar went on trial in York for his wife’s murder by poisoning but he was perhaps saved from the gallows by the local physician, Dr Milligan, who gave evidence three times at the trial - each time his story was different - and Mr Sagar was acquitted.

Haworth’s church graveyard is certainly interesting and certainly very crowded so it is not surprising that Benjamin Herschel Babbage - the inspector who conducted an enquiry and later published a comprehensive and damning report on Haworth’s water supply and sanitation arrangements -  recommended the closure of that graveyard. It was an informative afternoon poking about amidst those ancient graves which showed that life in byegone Haworth was very hard, with whole families dying within months of one another and parents having to cope with the loss of one child after another.
In the Methodist graveyard and the new cemetery the group were brought more up to date as they were shown graves of people who could be called celebrities of a more modern day Haworth - ‘Harry the Hat’ and the balloonist Lily Cove.

Posted by Richard Wilcocks at 8:42 am
Email ThisBlogThis!Share to TwitterShare to FacebookShare to Pinterest

There was also another walk - to historic Haworth - enjoyed by only a few; very much the poor relation. But it had also taken time and effort to prepare.