Charles Dickens and the Brontës 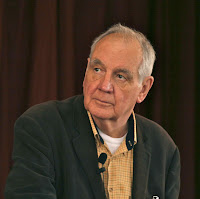 The annual June Weekend began on Friday with a well-attended lecture in the Baptist Centre given by eminent Dickens biographer Professor Michael Slater. The subject was Charles Dickens and the Brontës. The event was part of the 2012 Dickens bicentenary celebrations and took place on the eve of the anniversary of Dickens' death.


Equipped with an edition of Bleak House and little else, Professor Slater began by pointing out that there is a complete lack of evidence that any of the Brontës ever met Dickens, and not much to say about their opinions of him, even though just about everybody in their time read his works. We can speculate, of course, and we do know that Charlotte Brontë was averse to the caricaturing style and was wary of showiness and too much self promotion: reports of all those lavish London dinner parties at the Dickens household, with pineapples studding the table, would have aroused her disapproval.


Nevertheless, significant connections have been made: few important novelists of the nineteenth century were particularly interested in children, or the way they were treated. Charles Dickens and Charlotte Brontë stand out as different here. Lowood and Dotheboys Hall spring to mind, and Wackford Squeers and Brocklehurst have often been put together (misleadingly) in the same club. The young Jane Eyre could be compared and contrasted with Esther Summerson quite profitably, and it has been argued that Bleak House was an influence on Villette. Professor Slater read a few paragraphs from Chapter 3 in which Esther remembers her childhood doll, the only 'person' she felt able to talk to. Miss Barbary, Esther's strict godmother, later revealed as her aunt, could be lined up alongside Jane's aunt...


Theatre audiences in 1848 watching a Jane Eyre adaptation which had been rushed on to a stage not long after the book's publication were addressed by a servant at Lowood who spoke about the terrible Yorkshire schools which were full of unwanted children from the South - showing that Lowood was perceived by the playwright(s) as equivalent to Dotheboys Hall, revealed Dr Patsy Stoneman in question time. The Yorkshire Schools were closed down because of the outrage provoked by Dickens, but Cowan Bridge survived Jane Eyre.

Posted by Richard Wilcocks at 4:08 pm
Email ThisBlogThis!Share to TwitterShare to FacebookShare to Pinterest

The school at Cowan Bridge ( Lowood) was probably no worse than others in Victorian England.I think that in 1848 Charles Dickens had travelled to Yorkshire to see boarding schools for himself and he set about exposing the ugly truth. In his preface to 'Nicholas Nickleby' he has a little bit to say about Yorkshire schoolmasters!
'Traders in the avarice, indifference of parents and the helplesness of children. Ignorant sordid brutal men to whom few considerate parents would have entrusted the board and lodgings of a horse or a dog. They form the worthy cornerstone of a structure which for absurdity and a magnificent high minded laissez aller neglect has rarely been exceeded in the world.'
On his vist to Yorkshire Dickens called on William Shaw -headmaster of Bowes Academy. In 1823 Shaw had been prosecuted for neglect after two pupils became blind because of beatings and poor nutrition and it was common for one pupil to die at Bowes each year.
The Revd. Carus Wilson ( Mr Brocklehurst) was clearly a man with a genuine sense of charity but his religous fervour and his attitude to those in his care perhaps was a common attitude to children in those days.
James Laver summarises it when he writes in the 'Victorian Vista'
'Children are expected to exercise all the virtues and those who did not do so were not only severely punished in this world but were threatened with more terrible penaltites in the world to come.'

This was by far the best lecture at Bronte events in a long while. Professor Slater was able to make his remarks without the pomposity and over-intellectualisation that has characterised so many recent talks, and as a result was far more interesting and engaging.

It is in reading about events like this that I lament on being on the wrong side of the pond.

Not as much as I BLOODY DO! First visited the Parsonage to encounter the world of the greatest novel I'd ever read (Charlotte Bronte Nicholls' "Jane Eyre" itself!) when I was nineteen, on the National Express bus from London to Leeds. It was the summer of 1994 – and because I had been fortunate enough to win one of the Scholastic Corporation's Writing Portfolio awards at the end of my brutal (but not physically abusive, which is why they could get away with THAT!) Manhattan high school tenure, I was able to work at their London imprint, Mary Glasgow Magazines in Hammersmith. No wonder I thought, at the time, that the British universe (and the French, too) was going to be my oyster! ; } The Parsonage staff were so jovial, perceptive and pleasant. In what part of This Side Of The Pond do you live? Cheers! Rebecca Rose Hirschfield: eglantine.lass@gmail.com