Every year, members of the BrontÃ« Society gather in Haworth in the first week of June for a series of entertainments and events. This selection of photographs should give a flavour of what went on.

On the Friday evening, the Live Literature Company performed Charlotte, Emily and Anne by Douglas Verrall, directed by Valerie Doulton. The company was launched in October 2002 with Byron in Love, which was performed in the room in Melbourne House, Whitehall, where Byron met Lady Caroline Lamb, and has since gone from strength to strength.

Charlotte, Emily and Anne was performed in the West Lane Baptist Church in Haworth. 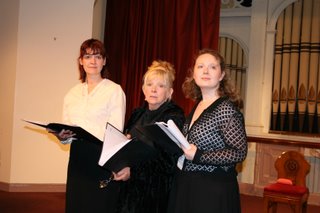 Anna Calder-Marshall later spoke about her famous role as Cathy in Wuthering Heights alongside Timothy Dalton's Heathcliff, and about her highly emotional re-encounter with the BrontÃ« Parsonage Museum earlier in the day.

Anna has worked many times with Valerie Doulton on William Blake programmes. Recent works include Lie of the Land at The Donmar, Birthday Party and Bird Calls at Sheffield Crucible, Humble Boy in the West End and her one woman show The Wild Girl. 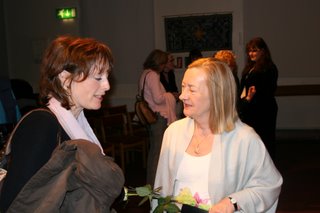 
On the Saturday, Dudley Green delivered a lecture based on his recently-published The Letters of the Reverend Patrick BrontÃ«, which is available online from the Parsonage shop. He read a number of the letters and made the point that Patrick was a highly eloquent, energetic and sometimes contradictory character, a compassionate campaigner whose letters often appeared in such newspapers as The Leeds Intelligencer and its rival, The Leeds Mercury. He could sound very radical and 'modern' in his opposition to the Poor Law Amendment Act, even at one point describing the workhouses as 'Bastilles' (a term used by some of the Chartists) and also conventionally 'old-fashioned' in his defence of the dominance of the Church of England. 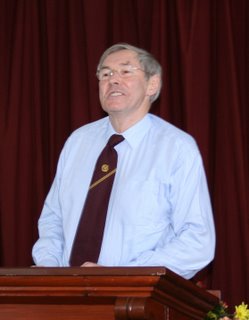 
Later on the Saturday, Justine Picardie talked about My Mother's Wedding Dress, her 'memoir of frocks worn by the Picardie family' in the words of Independent columnist Vera Rule - who goes on:

It's even more an inventory of sartorial loss - solitary socks and wedding dresses that disappeared through what Picardie laments as misfortune but sounds more like carelessness. And all draped around the central loss of her life, the death of her sister Ruth, which made Picardie contemplate the darkness at the heart of wardrobes: the serial little deaths and resurrections of fashion; the garments left behind, personalised by amendment and wear (the button resewn to the Gap jacket with unmatching thread) that sadden us as they hang there, carapaces for who we were or those we cared about.

The whole of Vera Rule's review can be found at http://enjoyment.independent.co.uk/books/reviews/article313161.ece


Her talk also included comments on the works of Daphne du Maurier in general and her The Infernal World of Branwell BrontÃ« in particular. This has recently been republished with a preface by Justine Picardie. 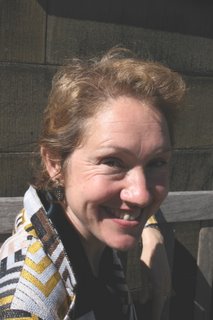 
On the Sunday, there were walks and a brass band concert. Excursions and visits to Manchester and Kirk Smeaton (once home for Arthur Bell Nicholls) took place on Monday and Tuesday - photos will be posted when available.
Posted by Richard Wilcocks at 9:04 am
Email ThisBlogThis!Share to TwitterShare to FacebookShare to Pinterest