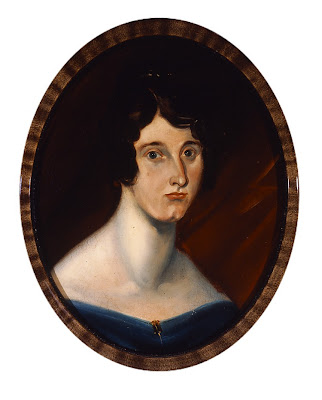 This painting by Branwell will soon be on display in the Parsonage – a portrait of Mrs Maria Ingham of Stanbury.

“We made a successful bid for it at the recent auction,” Librarian Ann Dinsdale told the blog. “She looks quite handsome, I think.

You could say she looks a little like a fourth Brontë Sister, if you look at the style and put it next to Branwell’s other portraits. Of course we’ve got her brother Robert already.

Now they are reunited! The Parsonage is going to close soon, to reopen in February 2008, and when we do, visitors will be able to see Maria.

They will also be able to see some other new acquisitions: three Victorian envelopes which we bought at a small auction house in Colchester called Reeman Dansie Auctions. One contains a lock of Charlotte’s hair, one a lock of Anne’s hair, and the third contains a ring which belonged to Charlotte.

The envelopes were given by Ellen Nussey to her friend Lady Morrison in the 1880s.”
Posted by Richard Wilcocks at 10:54 am
Email ThisBlogThis!Share to TwitterShare to FacebookShare to Pinterest