Last month (22 September - 24 September) The Brontës and their Background - a weekend conference - took place in the Baptist Centre in West Lane, Haworth.

Speakers were Stephen Whitehead (The Haworth the Brontës knew), main organiser Bob Duckett (Where did the Brontës get their books?), Ian Emberson ("The likeness of a kingly crown": John Milton and his influence on Charlotte), Yukari Oda (Wuthering Heights and the Waverley novels: Scott's influence on Emily), Elizabeth Leaver (Why Anne Brontë wrote as she did), Brian Wilks (Charlotte Brontë and the two churches) and Ian Dewhirst (The Real Haworth: Myths and Anecdotes)

Ian Dewhirst was the speaker at the Conference Dinner in The White Lion in Haworth.

Tom Winnifrith was in hospital so unfortunately could not contribute. Instead, a forum took place in his time slot, chaired by Robert Barnard.

One of the delegates was Marcia Zaaijer, who is an archivist from Rotterdam in the Netherlands: she recently sent the post below. Conference papers will probably not be published as a booklet (Brontë Society Council is economising) but should be available on request from Bob Duckett as photocopies. Contact him through this blog - email hevelius@poriruacity.com

A brief impression of the Bronte Weekend Conference 2006:


Every speaker impressed me with something to do or to remember. So many details of life in the Brontës’ Haworth, that both Steven Whitbread and Ian Dewhurst were able to present! Ian Dewhurst spoke in the kind of language, that in my Dutch imagination I like to think sounds like the language the Brontës heard around them.

And all those books they read, without a library next door, while I still have not read any more Walter Scott than Ivanhoe and Kenilworth. Of The Pilgrim's Progress and Paradise Lost I have nothing more than a vague notion that there was also a Paradise to be Regained, but this has more to do with me preferring happy endings than with any knowledge of English literature.

Really, maybe I should go and attend school in South Africa: I love the way Elisabeth Leaver championed Anne and The Tenant of Wildfell Hall. With a bit of luck some Afrikaners might understand my Dutch.

The nicest surprise for me as an archivist was on Sunday morning. Brian Wilks realised, or someone made him realise, that the Bishop of Ripon, who visited Mr. Brontë in the parsonage in Haworth when Charlotte was Patrick's only surviving child and already a celebrated authoress, went on to become the Archbishop of Canterbury. Obviously this means that his archives are kept at Lambeth Palace, and that in his archives are notes about his visit to Mr Brontë, which reveal that Charlotte was a good hostess to him. We know about the bishop's visit, because Charlotte writes about it in a letter. Now we get the story from the visitor, someone who actually stayed at the Parsonage. Two trustworthy historical sources which tell of the same meeting: that's a bonus for an archivist.


In the first photo below, taken during the forum, from the left Stephen Whitehead, Brian Wilks, Robert Barnard, Elizabeth Leaver, Ian Emberson. In the other photo, Ian Dewhirst holds forth. 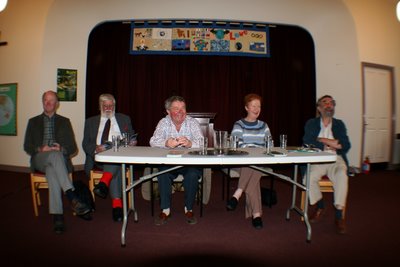 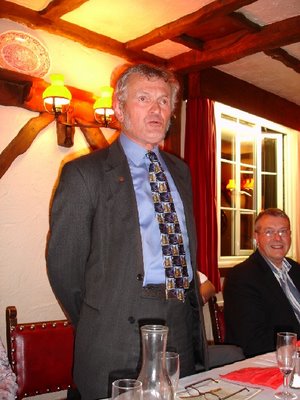 Posted by Richard Wilcocks at 7:03 pm
Email ThisBlogThis!Share to TwitterShare to FacebookShare to Pinterest